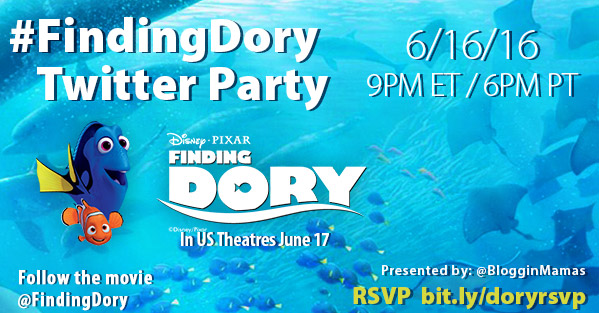 Due to circumstances beyond our control, this twitter party has been canceled. Sorry for any inconvenience. 🙁

Join Blog­gin Mamas as we host the #FindingDory Twit­ter Party on Thurs­day, 6–16–16 at 9p EST/6pm PST! We’ll be chat­ting about Dory’s new movie in US the­aters on June 17th!

Disney•Pixar’s “Finding Dory” welcomes back to the big screen everyone’s favorite forgetful blue tang Dory (voice of Ellen DeGeneres), who’s living happily in the reef with Marlin (voice of Albert Brooks) and Nemo (voice of Hayden Rolence). When Dory suddenly remembers that she has a family out there who may be looking for her, the trio takes off on a life-changing adventure across the ocean to California’s prestigious Marine Life Institute, a rehabilitation center and aquarium. In an effort to find her mom (voice of Diane Keaton) and dad (voice of Eugene Levy), Dory enlists the help of three of the MLI’s most intriguing residents: Hank (voice of Ed O’Neill), a cantankerous octopus who frequently gives employees the slip; Bailey (voice of Ty Burrell), a beluga whale who is convinced his biological sonar skills are on the fritz; and Destiny (voice of Kaitlin Olson), a nearsighted whale shark. Deftly navigating the complex inner workings of the MLI, Dory and her friends discover the magic within their flaws, friendships and family.

Directed by Andrew Stanton (“Finding Nemo,” “WALL•E”), co-directed by Angus MacLane (“Toy Story OF TERROR!”), and produced by Lindsey Collins (co-producer “WALL•E”), Disney•Pixar’s “Finding Dory” swims into theaters June 17, 2016. For more information, like us on Facebook, https://www.facebook.com/PixarFindingDory;, and follow us on Twitter, https://twitter.com/findingdory; and Instagram, https://instagram.com/DisneyPixar;.

Dur­ing the Twit­ter Party there will be a chance to win one of the fol­low­ing prizes by answer­ing var­i­ous ques­tions about the Dory and her friends. Win­ners will be selected at ran­dom from all eli­gi­ble entries.

Dis­clo­sure: Blog­gin’ Mamas is man­ag­ing this Twit­ter Party. Indi­vid­ual co-hosts are receiv­ing com­pen­sa­tion for their par­tic­i­pa­tion. All prize ful­fill­ment is the respon­si­bil­ity of the spon­sor.