Infertility is something that hits a sour note in my family due to endometriosis on both sides. I remember my Aunt Cindy struggling to conceive via numerous methods, then adopting through my other Aunt being her surrogate; only to miraculously become pregnant in her early forties. Unfortunately, she developed cancer due to the hormone changes, and passed away when her son was just two years old. My other Aunt & Uncle struggled to conceive, became foster parents, and were finally able to finalize their son’s adoption after almost 8 years. My cousin and I have also struggled with endometriosis issues. They thought my cousin would never conceive, as she had to have uterine surgery. Fortunately, her surgery helped her and she was able to have some kids of her own. As for myself, I did not get pregnant until I was 27. I know how much pressure people can place on you to have kids, as you start getting older. But, they did not know my situation before I had my daughter. Though I was able to get pregnant with my husband quickly both times; I suffered from extremely high risk pregnancies that led me to have my tubes tied after my son. Sometimes we fantasize that I could get it reversed so we can have more, but we both know the risk is too high. In fact, we were recently discussing adoption as an alternative. I’ve been judged by women because I chose to sterilize myself; them not knowing that I literally could’ve died during my births and that both my son and my husband were “pill babies.”

Even in 2019, there is a certain stigma associated with infertility, and everyone from parents to best friends can have an opinion about what some couples choose to do when it comes to having a baby. Josh Huber’s latest indie film Making Babies, brings awareness to the emotional, financial, and relational roller coaster couples endure when deciding to move forward with fertility treatments. The film, now playing in select cities nationwide, does a wonderful job of highlighting the comedic and painful sides of having a baby.

Making Babies puts a couple through the ringer of modern infertility treatments and questions whether their marriage will withstand the ultimate test. Katie and John Kelly (Eliza Coupe and Steve Howey) are ready to settle down and have kids. Five years later, all they have to show for their efforts is a mountain of negative pregnancy tests and an increasingly elaborate home micro-brewing rig, which John hopes will launch his company. As they run out of traditional options and their window closing, the couple explores the daunting world of medical, spiritual, and homeopathic methods to conceive a child. Making Babies features an ensemble cast which includes Bob Stephenson, Elizabeth Rodriguez, Ed Begley Jr., Jon Daly, and the late Glenne Headly.

I could relate to so much in this movie, because I witnessed a lot of these things with my own eyes. It had such a great way of taking a difficult subject and adding in a dose of humor, to make you feel like you are in their shoes. I hope that even if this movie is not playing in your area, you will be able to stream it soon. They really touch on this topic in a very different way; a way that has been neglected, or possibly avoided in the past for fear of doing it a disservice. It also introduced me to Eliza Coupe, who delivers comedic gold in such a natural way, that you almost feel like she’s really been through this type of situation before. Steve Howey stole the show though, with his facial expressions and willingness to go all in for the sake of comedy that speaks to your heart. 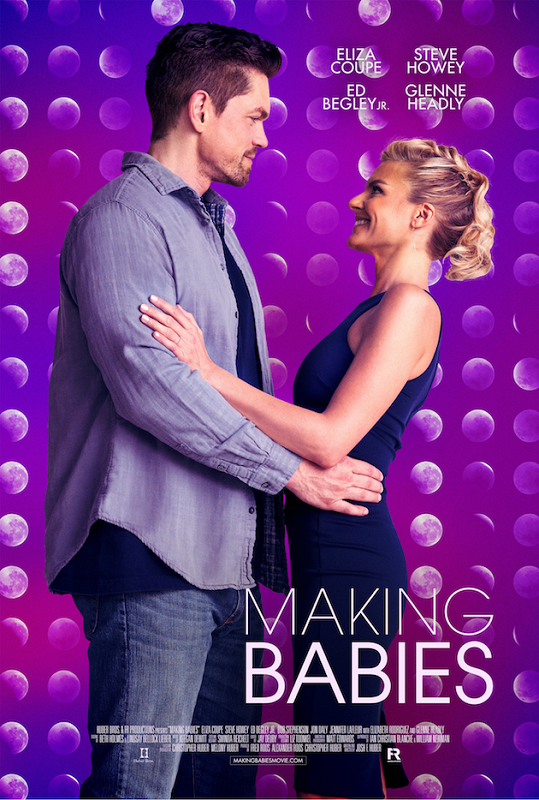 Get Social with Making Babies