Curious George on Hulu Twitter Party Tonight at 9p ET- Over $1650 in Prizes! 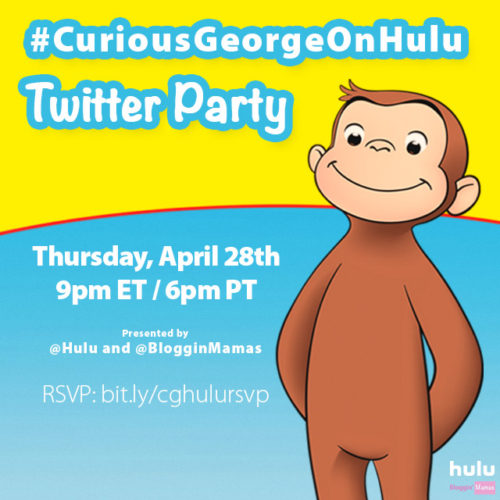 Join Blog­gin Mamas & Hulu as we host the #CuriousGeorgeonHulu Twit­ter Party on Thursday, 4–28–16 at 9p EST/6pm PST! We’ll be chat­ting about Curious George, now streaming on Hulu.
Date: Thursday, April 28th, 2016
Time: 9:00–10:00pm EST / 6:00–7:00pm PST
Hash­tag: #CuriousGeorgeonHulu
Pre­sented by: @hulu and @BlogginMamas
Mod­er­a­tors: Eng­lish– @HeLoEnterprises Span­ish– @BBabushka
Co-Hosts: @EnzasBargains @BabySavers @HaveSippy @DonnaHup @MamasMission
Panelists: @theCouponista @MommyPowers
About Hulu & Curious George
Beginning March 31st, Hulu became the exclusive subscription streaming home to all nine seasons – over 100 episodes – of CURIOUS GEORGE® TV series, which is produced by Universal Pictures Home Entertainment’s production arm, Universal 1440 Entertainment. Hulu is also the U.S. premiere home to new seasons of the series over the coming years. In addition, television specials including Curious George: Swings Into Spring, Curious George: A Halloween Boo Fest and Curious George: A Very Monkey Christmas, along with the feature-length originals Curious George: Follow That Monkey, Curious George: Back To The Jungle and future direct-to-TV specials are available to stream exclusively on Hulu.
Hulu is a premium streaming TV destination that offers hundreds of thousands of hours of the best of current season programming, premium original content, films and full seasons of hit series to subscribers with limited commercials for $7.99 per month or commercial free for $11.99 per month. Hulu is the only streaming subscription service that offers current season content from 5 of the 6 largest U.S. broadcast networks. Since its launch in 2008, Hulu has been at the forefront of entertainment and technology and continues to redefine TV by connecting viewers with the stories they love.
CURIOUS GEORGE® the television series is designed to inspire kids to explore science, math and engineering in the world around them in a fun and entertaining way. Based on the best-selling Curious George books by Margret and H.A. Rey, the series expands George’s world to include a host of colorful characters and original locales, while maintaining the charm of the beloved books. Each half-hour episode includes two animated stories followed by short live-action pieces showing real kids who are investigating the ideas that George introduces in his stories. The series encourages inquiry and curiosity, promotes hands-on exploration and shows parents and caregivers how to support children’s science- and math-related play. All nine seasons of the CURIOUS GEORGE® television series are a production of Imagine Entertainment, WGBH Boston, and Universal 1440 Entertainment, LLC.
Tweet­share:

Join us tonight (4/28) at 9p ET for the #CuriousGerogeonHulu Twitter Party with prizes! RSVP https://t.co/axMtwyvSTx; pic.twitter.com/9wmZRbMjN3