Disclosure: I am receiving a giftpack in exchange for sharing this announcement and giveaway. All opinions expressed are my own.

As I seek out ways to expose my children to more of their heritage and culture, I am coming across apps and shows that will help them with the Spanish language.  Recently I came across ZooMoo.

Check out the  ZooMoo Sizzle Reel to get a feel for it.

Here’s the announcement with tons of show info:

Following its highly successful launches in Mexico and throughout Latin America, ZooMoo, the world’s first children’s channel devoted entirely to animals and nature, is now available in the U.S. exclusively on DIRECTV, now part of the AT&T family.   Available to nearly a million homes throughout the country, ZooMoo is now the only channel in Spanish for pre-school age children and their parents available to DIRECTV Spanish base package subscribers on channel 432.

Designed to foster a lifelong love for animals and nature through a safe and unique television experience that is both entertaining and educational for young viewers and parents alike, ZooMoo interweaves puppetry, animation, and the world’s best natural history footage available in HD to tell stories about the animal world.

The channel is complemented by a free downloadable App to provide a one of a kind multiplatform experience that allows ZooMoo channel viewers to automatically collect animals they encounter on the TV screen and bring them to life on their tablet or smart phone with games, music, puzzles and other activities.

Karin Simoncini, ZooMoo’s head of programming and production said, “As a Latina mom of young children I’m personally thrilled that we at ZooMoo are partnering with DIRECTV to bring ZooMoo to Spanish-speaking audiences in the United States, where today, according to Pew Research Center, there are nearly twice as many Hispanic preschoolers as non-Hispanics in the U.S. DIRECTV deserves to be commended for its commitment to offering this audience a fully interactive ‘all animals, all the time’ entertainment experience that will be educational and incredibly engaging.”

“DIRECTV is passionate about offering high quality children’s programming to its Spanish-speaking customers in the U.S.,” said Emma Brackett, vice president of Content and Programming, AT&T. “We’re proud to be the exclusive provider of ZooMoo and a leader in entertainment to audiences of all ages.”

The standalone revolutionary ZooMoo App, which when synced to the channel enhances the interactivity by also turning smartphones and tablets into an extension of the channel, was recognized earlier this year with a Parents’ Choice Approved Award Seal of Approval from the Choice Foundation in the United States. In bestowing the award, the Foundation lauded the ZooMoo App as “a safe, intuitively-designed and entertaining way for young children to learn facts about animals and habitats, as well as the importance of caring for them.” EducationalAppStore.com echoed a similar endorsement in its review calling the ZooMoo app “one the most professionally, thoughtful, intelligent apps out there…deeply engaging…edutainment in its finest form…cannot be recommended highly enough.”

ZooMoo was developed by its CEO and former president of Fox Networks Group, David Haslingden. In 2012 he identified a niche in the market for children’s channels.  “ZooMoo was born out of research that indicated that preschool-age children are hardwired to be interested in animals – 80% of their dreams are about animals – and that if early on they don’t develop a sense of respect and caring for the natural environment they are at risk of never developing such attitudes. We saw a tremendous need to show children the wonders of the animal world and seized the opportunity to create a bespoke channel specifically for 3-6 year olds that unlike any other channel provides a foundation for lasting knowledge and growth by fostering the love and caring for animals and nature,” said Haslingden.

Already seen in 23 countries with a worldwide audience of more than 140 million, ZooMoo’s programming comprises 7,000+ separate animal stories and more than 500 hours of original content. ZooMoo’s signature, wholly original animal stories have been scheduled into unique one hour blocks under a structure developed in consultation with a team of leading childhood learning specialists from New Zealand’s University of Otago led by Professor Jeff Smith, Ph.D.

ZooMoo’s leading cast consists of funny, furry puppet characters who help young children develop a knowledge and affection for animals, leading to a lifelong love of conservation, including:

·         Flash, an engagingly good-natured photographer, dedicated, dependable and very charming, he is a keen adventurer with genial humor and a constant can-do attitude who explores the world and often ends up in unknown places in “Lost” and travels to different habitats to find out what animals are really thinking in “Look Who’s Talking?”

·         Piglet, a high-energy blast of boundless, breathless enthusiasm, who invents amazing solutions in her awesome workshop and explores the planet in her “Adventure Machine.”

·         Owl, who’s smart, wise, particular and slightly precious, as he guesses which animals Flash has sent him in “Download This!”

·         Baby DJ, a little monkey with headphones, bling and a cheeky grin whose mission is to turn the tables on all things animal and get everyone up dancing.

The ZooMoo channel made its worldwide debut in Brazil in September 2013.  In September 2014, DIRECTV began offering ZooMoo to customers in Argentina, the Caribbean, Chile, Colombia, Ecuador, Peru and Uruguay.

And Now for the Giveaway!!! 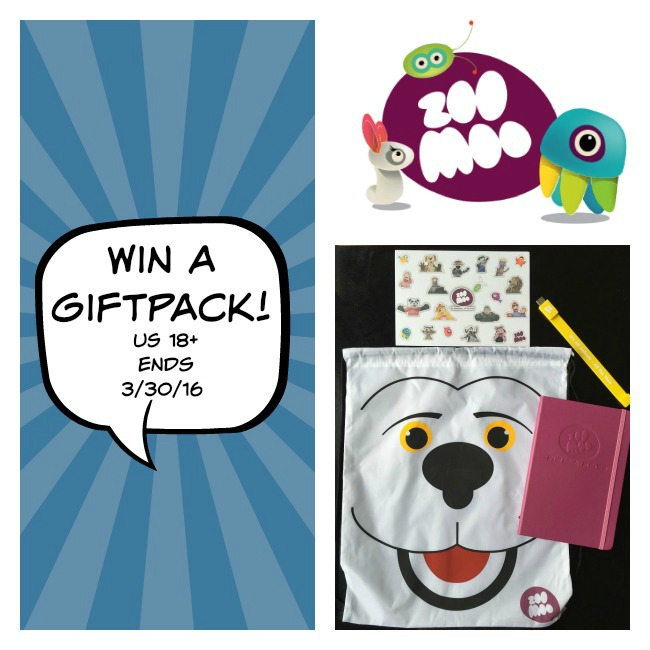 Disclosure: I am receiving a giftpack in exchange for sharing this announcement and giveaway. All opinions expressed are my own.