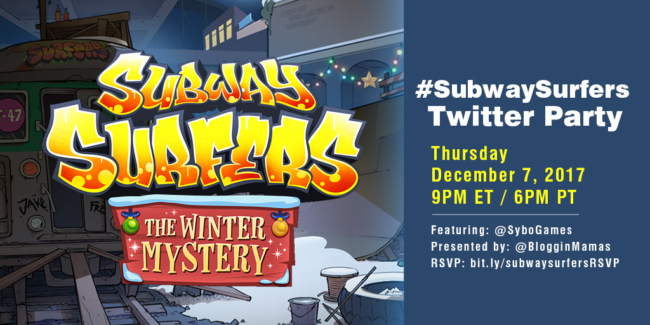 Join Bloggin Mamas as we host the #SubwaySurfers Twitter Party on December 7th, 2017 at 9pm EST/ 6pm PST! We’ll be chatting about the Subway Surfers and their new Winter Mystery Advent Calendar mini-site. Plus, there’s a chance to win prizes too!

Subway Surfers is one of the most successful mobile games of its genre, being crowned the number one most downloaded game across all platforms of 2017. Each day throughout December, Subway Surfers fans can experience the fully interactive online holiday calendar which offers first-look peeks of the brand new artwork from the hugely anticipated Subway Surfers animated TV series – currently scheduled for Summer 2018. The calendar can be experienced at: wintermystery.subwaysurfers.com. The animated series will premiere summer of 2018 with 10 x 4 minute episodes, followed by a long form series of 22 minute episodes. It will give fans a chance to delve into the lore of the Subway Surfers universe as they follow the adventures of the characters they have grown to love. The TV series and calendar are based on the Subway Surfers game – a slick, exciting, endless runner where players swipe as fast as they can to dodge oncoming trains! Help Jake, Tricky & Fresh escape from the grumpy Inspector and his dog. How long can you keep surfing in this slick, exciting endless runner? Available on Google Play, Apple’s App store, Windows 10 and Amazon

Join @BlogginMamas & @sybogames for the #SubwaySurfers Winter Mystery twitter party on Thu 12/7/17 at 9p ET RSVP: https://t.co/yy767lb1Ny; (AD) Join in as we chat about their virtual advent calendar & give away $700 worth of Amazon gift cards! pic.twitter.com/LZbYVNTbRk

NO PURCHASE OR PAYMENT NECESSARY. A PURCHASE WILL NOT IMPROVE YOUR CHANCE OF WINNING.

By RSVP’ing to this event and utilizing the #SubwaySurfers hashtag, the attendees acknowledge having read and agreed to these terms and conditions.

Twitter Party Prize Giveaway begins December 7th, 2017 at 9:00 pm ET and ends no later than December 7th, 2017 at 10:30pm ET (the “Twitter Chat Entry Period”). Entrants enter via following @SyboGames, @HeLoEnterprises & @BlogginMamas, and posting a tweet with the #SubwaySurfers hashtag during the Twitter Chat Entry Period. Five (5) Winners will be drawn randomly by random.org at approximately 12 minute intervals during the Twitter Party Entry Period. One (1) Winner will be drawn randomly via random.org from the event RSVP’s on the Mr. Linky widget.

The Released Parties make no warranties, and hereby disclaim any and all warranties, express or implied, concerning any prize furnished in connection with the giveaway. WITHOUT LIMITING THE GENERALITY OF THE FOREGOING, SUCH PRIZES ARE PROVIDED “AS IS” WITHOUT WARRANTY OF ANY KIND, EITHER EXPRESS OR IMPLIED, AND THE RELEASED PARTIES HEREBY DISCLAIM ALL SUCH WARRANTIES, INCLUDING BUT NOT LIMITED TO, THE IMPLIED WARRANTIES OF MERCHANTABILITY, FITNESS FOR A PARTICULAR PURPOSE AND/OR NON-INFRINGEMENT.

Disclosure: Bloggin’ Mamas is managing this Twitter Party. Individual co-hosts are receiving compensation for their participation. All prize fulfillment is the responsibility of the sponsor.