I can’t believe STAR WARS: THE FORCE AWAKENS finally opening in less than 2 weeks from today!!!!  The Lopez household is excited, for sure! 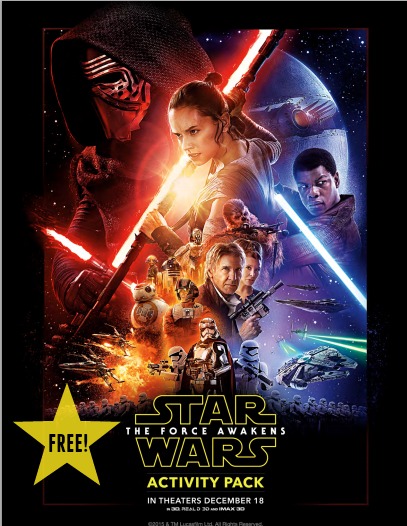 In fact, we’re so excited, that we are actually hosting a Star Wars-themed birthday party for Dittles on the 20th! We got a hold of a  Star Wars Family Activity Pack that has all kinds of activities, such as coloring sheets, a memory game and more! I’m going to print them out for the kids who attend. Thank God I have HP’s Instant Ink program. HP sponsored a Bloggin’ Mamas event last year and I learned all about the program. A few weeks ago we picked up an HP Envy on Amazon and signed up for it. I got the $9.99 plan just in case I need to print a lot, but they have plans for $2.99.   I actually had no printer for a year because it was so expensive to pay for ink before.

HP came to mind, as they just appeared on Good Morning America  doing STAR WARS themed crafts which are part of their printing activation for the film. In case you are interested in creating your own epic movie and Flipbook from your Instagram videos, you can learn how here: http://www.hp.com/go/instantink

Get Social With Star Wars

(I was not compensated for this post. I’m just passing along some great stuff for my readers).