It’s Force Friday! Time to Get Your Star Wars On!

Today is Force Friday! This morning more than 3K stores opened up at midnight to sell the new Star Wars: The Force Awakens inspired merchandise to the Star Wars fanatics like myself.

As part of a  YouTube Global Unboxing Event that lasted 18+ hours over the past 2 days, the new product range was officially unveiled. As a Star Wars fan, I caught the NY unveiling on Good Morning America with Youtube star Evan of EvanTube, aka my son’s hero. Evan debuted a drool-worthy Lego Millenium Falcon and the super cute BB-8 droid by Sphero that you can control with your smartphone. (Evan seemed to have a little bit of trouble keeping him on the table though, so it looks like you have to get used to it). 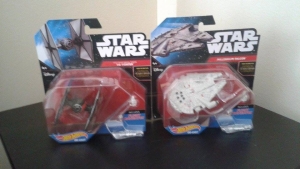 I snagged these Star Wars Hot Wheels at Walmart before they were gone. (I admit, they might not be part of the new items debuted, but they looked so cute in their display stand). You really can’t resist this when you see it because we are big Hot Wheels fans as well. The number of toys and all of the unboxings is overwhelming in a good way. Did I mention Papo already has the 31″ version of the Darth Vader we got him for Christmas a year or two ago? Dittles used to turn him around to face the wall at night because she was afraid he would come to life while she was sleeping. Papo also has a Darth Vader bookbag we got him for back to school. Do you think he likes Darth Vader? I might have to write up a post on all of the Darth Vader items he has. He has tons of other Star Wars toys and Angry Birds Star Wars toys too! And as expected, he wants the new toys too! Christmas is coming again soon!

Beyond lightsabers, construction sets, figures and collectibles, fans can find products across a wide variety of categories, including apparel for all members of the family, home décor, lifestyle accessories, books and more. New Star Wars products can be found around the world at mass and specialty retailers, such as Amazon.com, Kohl’s, Target, Toys “R” Us and Walmart, as well as Disney Store and disneystore.com.

Highlights from the merchandise line found in the U.S. include:

–       The ultimate Millennium Falcon children’s bed from Pottery Barn Kids, looking like something seen from a galaxy far, far away

–       A villainous take on home merchandise featuring new characters from the Dark Side, such as First Order Stormtroopers and Kylo Ren available at JCPenney

To preserve the integrity of key movie moments, an additional wave of products will be released closer to the film’s debut, when fans will be able to find additional items featuring the newest characters, including Rey, Finn, Kylo Ren, Captain Phasma, BB-8 and more. On December 18, a Play Set based on Star Wars: The Force Awakens will become available for Disney Infinity 3.0 Edition, the latest installment of the best-selling “toys-to-life” video game from Disney Interactive.

Disclosure: I was not compensated for sharing this info. I am sharing for my fellow Star Wars mamas. Disney did provide me with some of the content used above, but all opinions expressed are my own.