I can’t believe it’s been three years since I last interviewed Selena Gomez, and it was for the first Hotel Transylvania movie. Selena returned to Miami to promote the sequel, Hotel Transylvania 2 which opens on the 25th. I got a chance to participate in a screening, a special character breakfast, and a blogger interview session with her. Last time my kids were in the other room because the babysitter bailed on me, and kids were not allowed in. My daughter, though only 4 at the time,  was a huge Selena Gomez fan and was pretty bummed when she could not meet her before.  This time, it was the kids who actually got to do the interviewing and Dittles was so excited to do her very first Periscope of the interview for Dittles World. Little known fact: Dittles actually dances to the Selena Gomez channel on Pandora for some of her Youtube videos, and we just swap out the music. Needless to say, she was ecstatic when we surprised her with the news of the interview the day before.

We started the Periscope a bit early that day and we could see a lot of people from all over the world jumping on. You could see the comments in numerous languages and people were very excited, anticipating her arrival. When she finally arrived, the hearts started flying. My daughter was elated to see her idol right before her eyes. 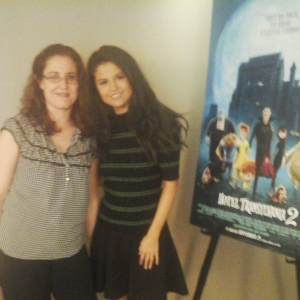 Having interviewed her before, I noticed a definite sense of maturity that had developed in Selena these past three years. This growth was mirrored in her character, Mavis, who is now a wife and mom. Ironically, when we went to take a picture with Selena towards the end and I brought up the fact that this was the 2nd interview, Selena said she suspected she hadn’t changed all that much and laughed slightly.

When did you start acting?

I was 7 years old. My mom did a lot of theater and I just loved watching. My mom is like my hero. I admired her so I asked if I could do it and I did it.

How long did it take to voice Mavis in Hotel Transylvania?

The first one was a little harder because we were trying to figure out what made Mavis Mavis. The second one, collectively a week.

This is such a hard question. I really love both, that’s the thing. I think that once I become older, like marriage status, but we are not going to talk about that right now. That’s when I will lean toward acting a little more.

Was it fun making the movie?

Yeah it was really fun! I am the only girl in the movie so I have to be honest. It was pretty lonely without having some of the women. Adam Sandler and Andy Samberg crack me up and they are just the best.

What was your favorite part?

I honestly loved that we focused on…accepting people’s differences. I thought it was extremely important that no matter where you come from, you are accepted. So I think acceptance is really special.

Do you know the Whip Nae Nae?

Yes I do….Do you? I guarantee you know it better than me. It’s like this,right? (She begins doing the dance). I got it, alittle bit right? But you are still better than me.

So how was it revisiting this role now since she [the character] is grown up and married?

Honestly, this was such a fun project. for me to be a part of. (Selena then talks about loving the “littles” audience that the movie allows her to connect with and  transitioning herself into becoming a young woman.)

What was your favorite scene?

Favorite scene?  There is probably the scene when Dennis (my son) is standing on top of the suitcases and is trying fly because all he wants is to be a vampire to be normal, and she is precious and telling him you are perfect the way you are and we may move to California, and everything will be okay.

You have awesome friends. What quality in friends do you look for?

I like friends who are real, so if I make a mistake or hurt someone’s feelings, they will come up to me and tell me the truth. And I like that.  I like having people who are honest with me and make me a better person. So, I’ve friends with so many people and sometimes it is not a good situation to be in you have to be aware of who you are around. That’s very important.

Were you afraid of monsters and who is your favorite monster?

I am partial to Dracula, but I do really like the mummy.  (She began referencing other movies that scared her). I was more afraid of dolls and that kind of stuff.

How much Mavis are you in real life?

Mavis is for sure cooler than me, with cooler abilities. She is really fun and really loving and she took a chance from falling in love with Johnny. I liked that because she was fearless.

The 2nd one. I mean the first one has a special place in my heart for sure,  but the second one has this whole family feel and I love that!

Did you get to work with Drac?

I did, yes. Adam is very involved. He would help with some of  the jokes as a producer and he did come into the recording session a couple of times. I thought that was really nice because you are alone in the beginning.

How many recording sessions did you do together?

I think like 2. We were never really together together recording, though I would have liked that. It was 7 or 8 days collectively.

Were you cracking up all of the time?

Oh my gosh, I couldn’t keep a straight face. Some of them actually do improv. It was incredible to be able to listen and see their interpretation because you could read it one way, but when people put their take on it, it’s awesome!

So what is next for you?

My album Revival comes out October 10th, which I am very excited about because it is an extremely personal record. It’s kind of something that is transitioning me.

The interview continued with questions regarding her advice to girls who want to act, future acting projects, her favorite Halloween costumes, what she fears, being Latina and more! We will be posting the full interview video on the Dittles World Youtube channel, so stayed tuned!

In the meantime, check out the official trailer for the movie below:

Hotel  Transylvania 2 is in theaters September 25, 2015, so Order Your Tickets now!