Disney On Ice Goes Pirate-Y and So Did I 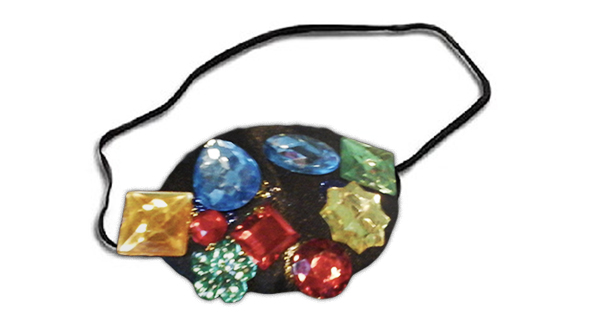 I challenge you to find a pic with me in my pirate-y garb. I donned it for the pirate-themed VIP party we attended prior to the latest Disney On Ice Show, Treasure Trove. I, in fact, was the one who dressed up this time, not the kids. But they did get their chance to get into the pirate spirit, as they made bejeweled eye patches and fought with plastic Pirates of the Caribbean swords that were in our giftbags.

My kids raced to scoop up all of the gold doubloons scattered on the tables, secretly hoping they could trade them in for a prize.  The giftbags at each table offered a variety of toys, cups, and programs; making each one unique. I was so happy to be able to bring one of my readers and her family along, to receive the VIP treatment as well. 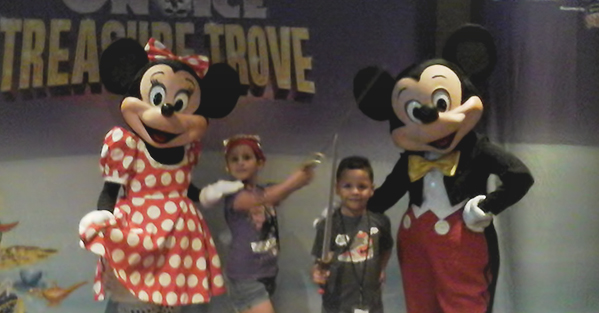 After a special photo with Mickey and Minnie, my kids headed towards the food table which offered kid-friendly snacks like chicken fingers, sliders and cheese with crackers. They also had canned sodas, water and boxes of popcorn. Being somewhat frugal, I opted to bring those along with us for the show. As the start time loomed near, the kids got in their last bit of play and I got in some conversation time with the adults. 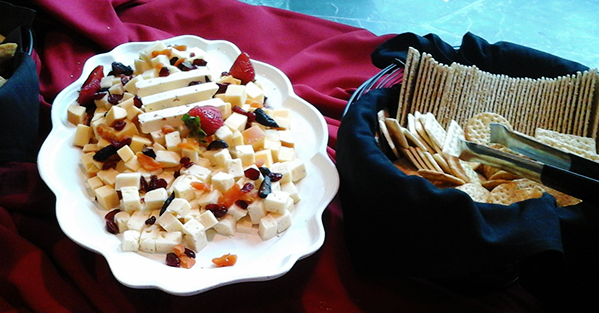 After finding our seats, we sat and began patiently waiting for the show to start. The theme of the night was Treasure Trove and meant to not only showcase pirate-themed Disney stories, but to also highlight the stories we hold close in our memories. Having attended Disney On Ice shows in the past, I was pleasantly surprised by the showcasing of a wider variety of Disney characters than we usually get exposed to. It was both refreshing and nostalgic.

One thing I noticed this time was a strong focus on costuming. For instance, when they featured the Lion King, there were skaters who had long poles extended up from their backs, and then almost shear animal shapes attached. When they all skated around each other, it felt like you were watching a stampede. The detailing on the lions there and on the fish later on in the show, were beautifully painted. Other classic stories that they featured were, of course, Peter Pan & Tinkerbell (Dittles favorite character since she was 1), Alice in Wonderland, Tangled, The Princess and The Frog, Snow White and the Seven Dwarfs, Aladdin, The Little Mermaid, and more!  Another striking thing I noticed this time, was also the depth and vibrance of the colors. You can see that they paid attention to the full visual experience of the audience, even incorporating black light to showcase an underwater scene. My kids said that this was “the best one ever.” I have to say that I enjoyed it very much.

The Disney On Ice Treasure Trove show is running in Broward at the BB& T Center through the 20th and Miami at the American Airlines Arena until the 27th. For more ticket info and learn of more shows in your area, you can visit this LINK!

Disclosure: While not monetarily compensated for this post, I was provided with tickets and the VIP party admission  in exchange for hosting a giveaway and sharing my honest opinion of the show. All opinions are my own.