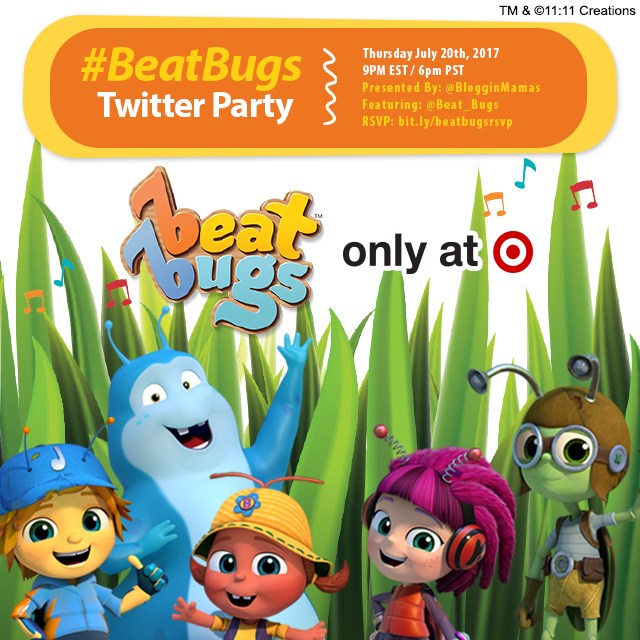 Join Bloggin Mamas as we host the #BeatBugs Twitter Party on July 20th, 2017 at 9pm EST/ 6pm PST! We’ll be chatting about the Beat Bugs™, their Netflix show and their interactive merchandise only available at Target. Plus, there’s a chance to win prizes too!

About the Beat Bugs
Created by Josh Wakely, Beat Bugs is an Emmy Award-winning animated kids series based on  music made famous by The Beatles. The story revolves around the lives and adventures of five best friends — charming and funny childlike bugs who explore and learn in their suburban backyard home. Each episode ties in a new cover of a song made famous by The Beatles in an innocent and child-friendly fashion, sung by one of the characters or guest stars that include mega-musicians P!nk (“Lucy in the Sky With Diamonds”), Sia (“Blackbird”), Aloe Blacc (“Rain”), The Shins (“The Word”), Jennifer Hudson (“I’ll Follow the Sun”), and more. Beat Bugs introduces a new generation to the music of the most influential band in rock history.  www.BeatBugs.com #BeatBugs

About the Beat Bugs merchandise exclusively available at Target
The curated assortment of interactive Beat Bugs merchandise across multiple categories hits Target stores July 9th just in time for Back to School. The line seeks to embody the musicality, humor and heart of the show, across several aisles that include toys, electronics, games, stationery and back to school, apparel, accessories, health & beauty and more.

A few standouts in the line-up surely to delight young fans include the Beat Bugs Hijinx Alive™, Beat Bugs Yellow Submarine and the Guitar Mini Deluxe Beat Bugs: With A Little Help From My Friends. 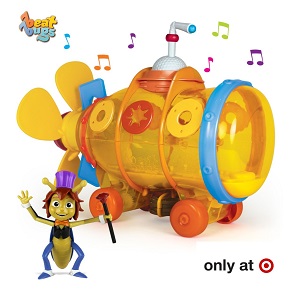 Guitar Mini Deluxe Beat Bugs: With A Little Help From My Friends
MSRP:  $15.99
Age Grade: 18 months+
Be a rock star! This 11’’ x 11’’ case-bound board book comes with a star-studded, two-color detachable guitar module. The guitar has five song buttons that feature Beat Bugs characters and play 10 songs made famous by the Beatles! You can even rock out while songs play by using the whammy bar and two sound buttons to add cool effects to the songs. Sing along with the lyrics printed in the book to build and support early reading and literacy skills. Songs include “With A Little Help From My Friends,” “Ticket To Ride,” “Hello Goodbye,” and others. Kids will love learning through play!

You can find them here: http://beatbugs.toys/BlogginMamas

NO PURCHASE OR PAYMENT NECESSARY. A PURCHASE WILL NOT IMPROVE YOUR CHANCE OF WINNING.

By RSVP’ing to this event and utilizing the #BeatBugs hashtag, the attendees acknowledge having read and agreed to these terms and conditions.

Twitter Party Prize Giveaway begins July 20th, 2017 at 9:00 pm ET and ends no later than July 20th, 2017 at 10:30pm ET (the “Twitter Chat Entry Period”). Entrants enter via following @Beat_Bugs, @HeLoEnterprises & @BlogginMamas, and posting a tweet with the #BeatBugs hashtag during the Twitter Chat Entry Period. Five (5) Winners will be drawn randomly by random.org at approximately 12 minute intervals during the Twitter Party Entry Period. One (1) Winner will be drawn randomly via random.org from the event RSVP’s on the Mr. Linky widget.

The Released Parties make no warranties, and hereby disclaim any and all warranties, express or implied, concerning any prize furnished in connection with the giveaway. WITHOUT LIMITING THE GENERALITY OFTHE FOREGOING, SUCH PRIZES ARE PROVIDED “AS IS” WITHOUT WARRANTY OF ANY KIND, EITHER EXPRESS OR IMPLIED, AND THE RELEASED PARTIES HEREBY DISCLAIM ALL SUCH WARRANTIES, INCLUDING BUT NOT LIMITED TO, THE IMPLIED WARRANTIES OF MERCHANTABILITY, FITNESS FOR A PARTICULAR PURPOSE AND/OR NON-INFRINGEMENT.

Disclosure: Bloggin’ Mamas is managing this Twitter Party. Individual co-hosts are receiving compensation for their participation. All prize fulfillment is the responsibility of the sponsor.