Talking Tom Bubble Shooter Has Popped Onto the Digital Scene

Okay, first of all, I have to be forthright and upfront.  I am a big fan of Talking Tom by apps creator Outfit7, and I recently moderated a Twitter Party for them.  When it came out five years ago, I was one of those moms who was happy to hand my kids the app in the shopping cart to give me 15 minutes of peace while shopping (otherwise, it was a constant battle to stop them from grabbing every box or bottle on the shelf and dumping it on the floor.)  So to put it lightly, Tom and I are friends. 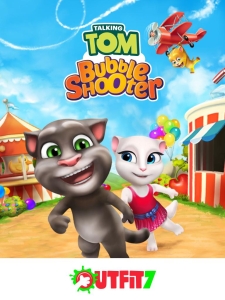 This time Tom is back in Talking Tom Bubble Shooter.  Warm your fingers, this game is highly addictive!  It takes place in a carnival type environment, where your goal is to pop as many colorful bubbles as you can before they reach the floor (where your bubble cannon is located.)  You can chose to play with characters in the game, or play with friends around the country or even world which is really fun.

Now admittedly, I’m not the most coordinated video game player as I was more of a joystick fan back in the day (Ms. Pacman rules!)  But I didn’t do that bad here, even if it did take me a while to figure it out.  But it is really fun and fast paced;  and even if you lose, you can push play again so quickly that you can fool yourself into thinking you’re winning. 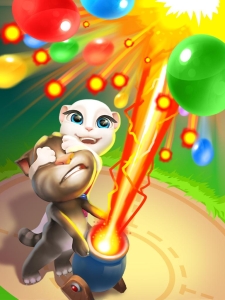 It is also nice to see more of the Talking Friends gang as part of the action here.  Right now I’m playing as Hank who’s a white dog with a blue eye spot and ears – super cute.  Hank’s a part of the Talking Tom and Friends Animated Series world, so I love that they’ve brought him in here.

I’ve played for about 1 ½ hours (not consecutively) and I’m on level 8 (playing TTB’s character “Goldilocks.”)  So unlike a lot of other games, I am actually moving up in levels which is a satisfying feeling.

Sadly, my six year old is a more skilled player than I.  He’s also having a good time collecting trading cards and stickers too which is another feature of the app.

One of the best things about this game is that it’s free, and it’s available on all platforms including iOS, Android, Amazon and Windows!  So just about everyone can pop in and play!  http://outfit7.com/apps/talking-tom-bubble-shooter/

Disclosure: This is a sponsored collaboration between Bloggin’ Mamas and its advertisers. All opinions expressed are my own.