Disclosure: I received items from Sony Pictures Home Entertainment and Jazwares in order to facilitate this post. No additional compensation was received, though may contain affiliate links, and all opinions expressed are my own. 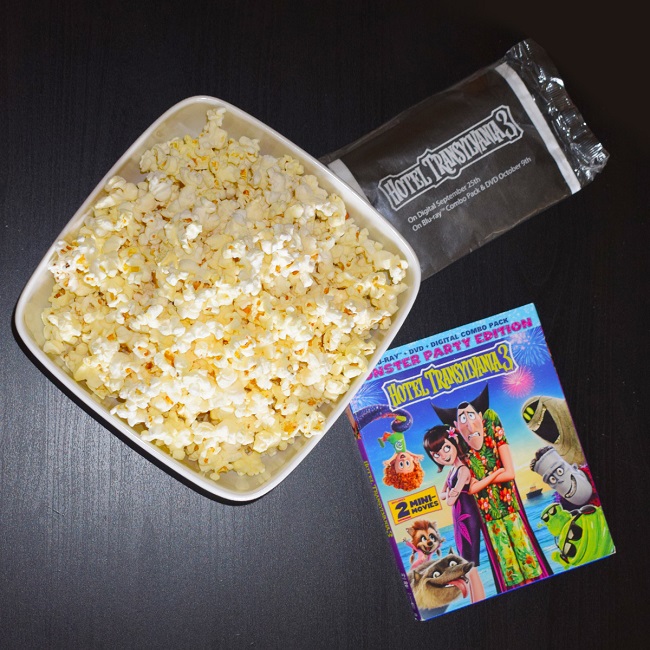 With Halloween fast approaching, now is a great time to plan a fang-tastic party for your favorite little monsters. Thanks to the bonus features on the new Blu-ray, DVD, and Digital release of HOTEL TRANSYLVANIA 3 from Sony Pictures Home Entertainment, you can easily plan out crafts, snacks, games, songs, and even a dance party. I put these features to the test when I planned our own movie night this past week. Below you will find my tips, as well as some other resources and printables to get you started on your own party.

Plan Your Own Spook-tacular Sleepover

This feature will give you all details on how to make your own sleepover spook-tacular! From snacks to crafts to games and more, follow these steps to create a Hotel T sleep-over with your friends and family, the perfect setting to binge watch all 3 Hotel Transylvania movies. 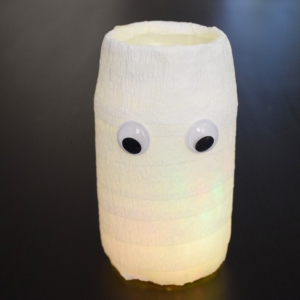 Layer the streamer so it goes over the edge. Then tape around the inside of the jar, to give the edge a smooth look. Glue sticks are fine for putting the eyes onto streamers, but may not be strong enough for gauze or other materials. If you plan on using them, you may want to try glue dots or craft glue. If you don’t have a flameless candle or light available, you can use a light-up ice cube or a glow bracelet. 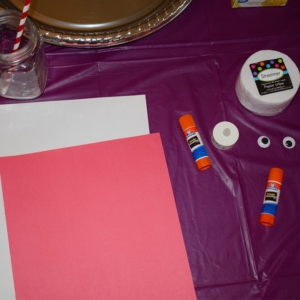 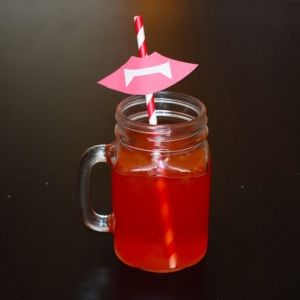 Create  lip and fang patterns that the guests can trace to make their lips and fangs. The sizing can be very important, so it’s best not to leave this part to chance. As a bonus, there’s a recipe for Drac’s Spooky Smoothie included in this download below. I have not tried it yet, but it sounds yummy!

The supplies list calls for felt and a hot glue gun, so plan on visiting a craft store to get the materials needed. This project is better suited for a small party of 4 kids or less, unless you have multiple glue guns and parents on hand to assist. (We opted out of this craft for this party, so the image above is a screenshot from the bonus feature.) 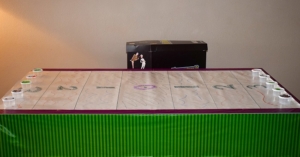 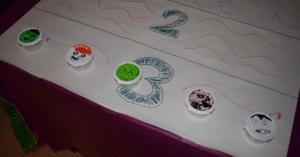 The supplies list calls for a roll of white paper, as well as lids or circular items to be used as pucks. I bought a roll of wrapping paper that had the lines as guidemarks on the inside. This can help line up the scoring lines. As for the pucks, I used a pack of small, round, lightweight storage containers. They slide easy on the smooth wrapping paper inside. Plus, they can double as party favors after the party because the kids can put little candies in to take home with them. 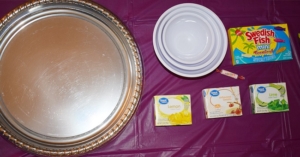 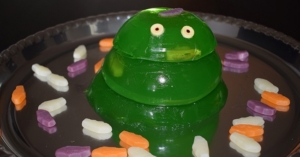 The supplies list calls for edible eyeballs and candy fish. Edible eyeballs can be hard to find, unless you buy them in a craft or party supply store. I took two Smarties, and then used a toothpick to put on small dots of Hershey’s syrup on them to make the eyes. Tropical flavor Swedish Fish come in purple, orange, white and pink. I used the pink ones to go inside of Blobby, and the rest I scattered on the tray for a Halloween look. I recommend reading the packaging of the gelatin (like the video says), as my plain gelatin required it to be dissolved in cold water first before being added to the boiling water.  Also, I had to add cold water to the mix once I removed it from the heat. 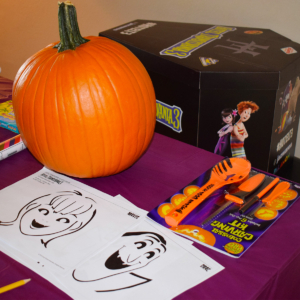 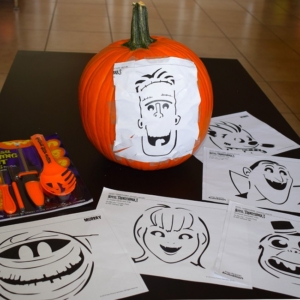 Find a pumpkin with a flat side and a long stem, because those tend to last longer. When you apply the stencils, make cuts in the paper so that you can try to tape the paper onto the pumpkin as smooth as possible. Use a tool, or a toothpick, to puncture holes into the stencil all the way around. Don’t carve the pumpkin until Halloween is within 48 hours, because they can rot pretty quickly once carved. Apply Vaseline to the edges to help preserve them. Don’t forget to carve an airhole in the rear and/ or top of the pumpkin so that the flame won’t suffocate.

Learn how to turn yourself into your favorite Hotel Transylvania 3 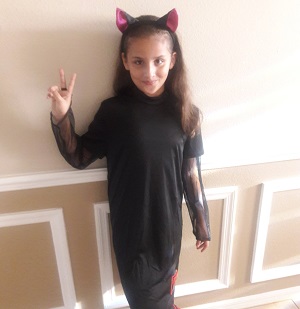 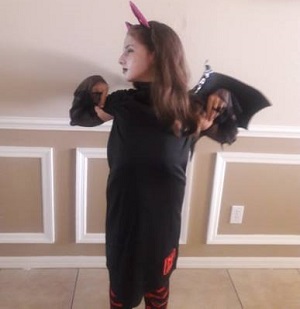 When applying makeup to your child, you may not want to put regular makeup on. It’s totally fine to get a vampire makeup kit that is safe for their skin. The white can be used all over the face, to give it the pale look. Make sure to blend the white makeup in so that it is consistent. For Mavis, you can use the black for the lips and to slightly line the eyes. The vampire kits usually come with red, and you can mix the red and white to create a pink blush to lightly apply to the applies of the cheek as Mavis has a slightly rosy cheek. You can even use the black to create the widow’s peak, if you don’t have a wig.

Here’s a sneak peek at the Mavis tutorial:

Sing along to three Hotel Transylvania 3 inspired songs with your favorite characters!

Get up and get moving to this haunting monster mash.

Here’s a quick clip from it:

Other Bonus Materials Include:

Make an Invite, Grab These Activity Sheets & Enhance the Party with These Toys from Jazwares! 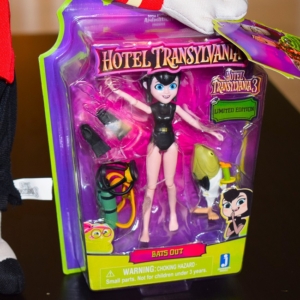 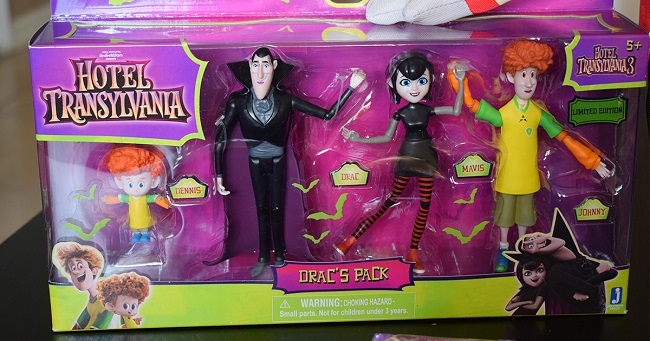 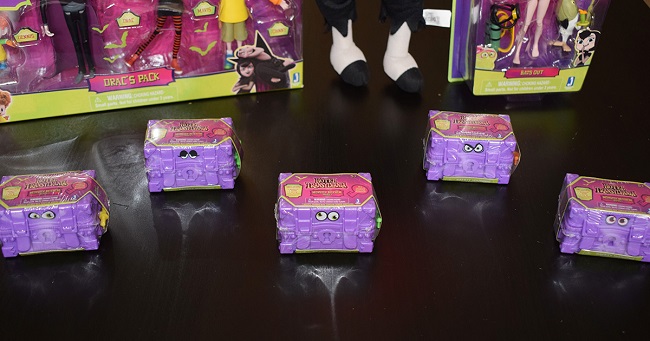 Jazwares is an award-winning toy company that has created a whole new series of toys based on the HOTEL characters. These toys are awesome, and serve as a great way to further entertain the attendees at the party.

Buy It Now On Amazon! 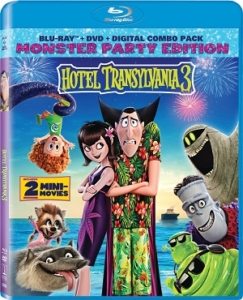 The Drac Pack is back with HOTEL TRANSYLVANIA 3, which debuted on Digital HD September 25, and on Blu-ray™ Combo Pack and DVD on October 9, just in time to for a spooky, fun, family movie night right before Halloween! This must-own family comedy, which has grossed more than $425 million in theaters worldwide to date, follows in the tradition of the blockbuster Hotel Transylvania franchise when Mavis surprises Dracula with a family voyage on a luxury, haunted monster cruise ship. Of course, the rest of the Drac Pack has to tag along, and that’s when things get a little…batty. The monsters are having a great time, indulging in all of the shipboard fun the cruise has to offer, from monster volleyball to colossus-sized buffets and exotic excursions, but then the unexpected happens when Drac falls for the ship’s mysterious (and dangerous) human captain Ericka. The third film in this family-friendly monster franchise is the best reviewed installment and you’re invited along on the haunted cruise vacation!

HOTEL TRANSYLVANIA 3 has a run time of approximately 97 minutes and is rated PG for some action and rude humor.

Get Social with Sony Pictures: