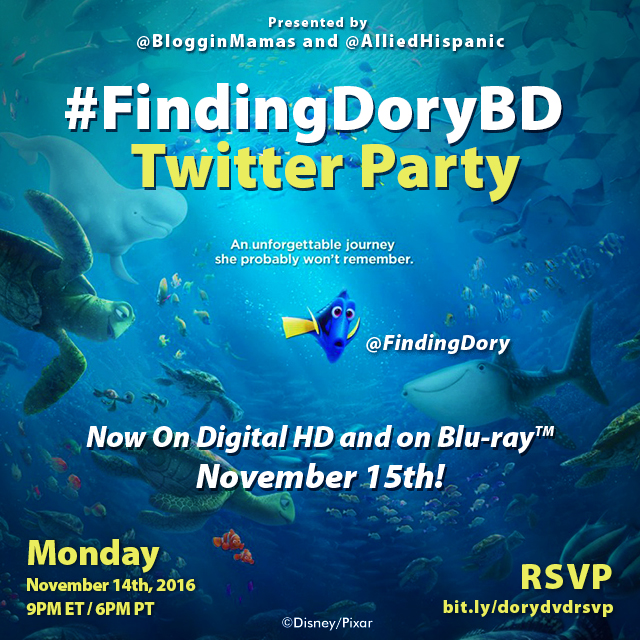 Join Blog­gin Mamas as we host the #Find­ing­DoryBD Twit­ter Party on Monday, 11–14–16 at 9p EST/6pm PST! We’ll be chat­ting about Dory and the Finding Dory release on Blu-Ray, DVD and On-Demand!

The much-anticipated summer blockbuster, Disney•Pixar’s “Finding Dory,” swims home just in time for the holidays on Digital HD and Disney Movies Anywhere (DMA) on Oct. 25 and on Blu-ray 3D™, Blu-ray, DVD and On-Demand on Nov. 15. Viewers can watch Dory’s hilarious and heartwarming quest to find her family and continue the underwater adventure with hours of immersive bonus features.

The film’s playful and plentiful bonus offerings include “Piper,” the theatrical short film starring an irresistible sandpiper hatchling; an all-new mini short featuring interviews with Dory’s pals from the Marine Life Institute; a behind-the-scenes look at the most challenging character Pixar has ever created; never-before-seen deleted scenes, including a digital exclusive featuring the Tank Gang from “Finding Nemo” who make it their mission to get Marlin and Nemo to the Marine Life Institute; and much, much more.

Thirteen years after the original, audiences get a new chapter in the story of their favorite forgetful blue tang. As returning director Andrew Stanton describes, “I realized that I was worried about Dory. The idea of her short-term memory loss and how it affected her was unresolved. What if she got lost again?” His response is a touching tale of friendship and family that’s truly unforgettable … perhaps even for Dory.

FINDING DORY is available on Blu-ray, DVD and On-Demand November 15th! Check out these movie trailers!