WWE’s be a STAR Comes to Miami

With all of the buzz surrounding Wrestlemania and the Hall of Fame induction in South Florida, it was the perfect time to put the focus onto the children of the community. In addition to making visits to local children’s hospitals & the Make A Wish Pizza Party, the WWE held two anti-bullying rallies; one at Hialeah Gardens Middle School and  one at the John F. Kennedy Middle School in North Miami Beach. 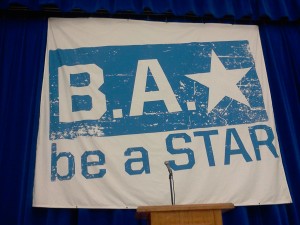 Co-founded with The Creative Coalition, “be a STAR (Show Tolerance And Respect),” is centered on taking positive steps to  eliminate bullying in our society. Former “American Idol” contestant (and WWE  fan) James Durbin joined by WWE Superstars and Divas delivered their anti-bullying messages to more than 1,000 sixth-grade students on Thursday (3/28/12). 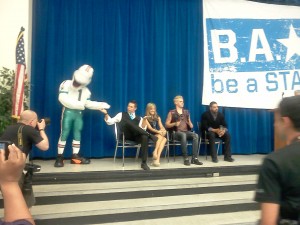 I was invited to attend one of the rallies and interview some of stars. I fortunately was also allowed to tote along my two toddlers. I attended the rally at JFK, where James Durbin, David Otunga, Mike “The Miz,” and Lilian Garcia made appearances. Several local community leaders were also in attendance. 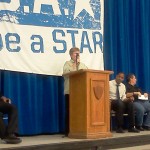 The rally started off with an appearance by T.D., the Miami Dolphin’s mascot. He really revved up the group of kids in the auditorium & even posing with my son, Joaquin. 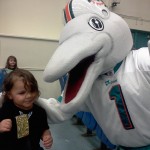 One by one, each of the stars got up and told their story of being bullied and how they have overcome it. David told us about how he was teased in school for being smart & wearing glasses. He also told us about how he would deliberately answer questions wrong to avoid being bullied. However someone important in his life showed him that his intelligence was a gift, and he used that to get to Harvard. The Miz told us how he had been bullied growing up and how he is still bullied via Twitter, but how he does not let the harsh words phase him. Lilian tells us of coming from Spain to live in South Carolina, only to be made fun of for speaking Spanish and wearing dresses when other girls wore jeans. James told us about how kids teased him for having Tourette’s syndrome, but how he didn’t let the disability take over his life. Both Lilian & James gifted us with brief singing performances, which I have to say was pretty awesome. 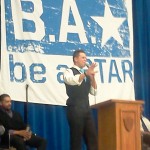 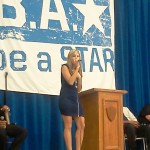 After they spoke, several sets of tickets to the Hall of Fame induction and Wrestlemania were given away to some lucky kids in attendance. (All boys, go figure.) Then they did a be a STAR chant.

Overall, I think the kids were most amused by T.D. and The Miz really knew how to grab their attention. All of the stars had tons of cheers. It was nice to see so many kids who were inspired. Having coordinated afterschool and prevention programs very close to where this school was located, my heart was warmed to see them get such an opportunity.

Following the rally, I was given the opportunity to interview the stars. I was really looking forward to this as wrestling and AI have a strong presence in my household. I mean my husband is always watching wrestling videos and shows, and I remember going through AI and being so disappointed that James didn’t win. In my opinion, his voice is out of this world.

Here’s a brief synopsis of each of the interviews:

Me: How were you able to take the character and your dream of becoming a professional wrestler and make it a reality?

The Miz: I have always loved wrestling, so when I got onto The Real World I created this character and went for it. I felt that if I could beat out all of the people trying to get on TRW and make it on there, I could make it to the WWE too! Coming from a small town like Parma, OH, there is usually a life path you follow. However, going on the reality show allowed me to expand my horizons.

Interview Notes: Of course I opened with the fact that I remember him being on The Real World, and already having developed The Miz character before he was even involved with the WWE. I have to admit that The Miz character appears somewhat conceited and a bit cheesy on tv, but meeting with him in person showed me that he is actually humble and a great entertainer. He even offered to sign my son’s wrestling belt without me even asking. 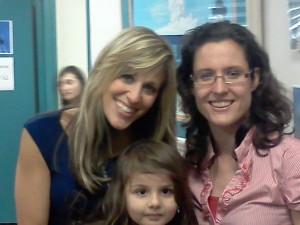 Me: What helped you to overcome the bullying about your language and clothing?

Lilian: Music. From the moment I started singing at the age of five, I knew it was my escape. When I was a teenager, I spent a lot of time trying to be popular but I couldn’t party like the others. I turned to singing and decided I didn’t need to try to be popular. I sang at pep rallies, etc. and this was my way of getting over being teased.

Me: How did you get involved with the WWE?

Lilian: I auditioned in 1999 and got the job. I went on a two year hiatus at one point, but came back. I have been with them for about 11 years now and I love it.

Interview Notes: Being that I actually lived in South Carolina for a stint, of course I mentioned this to her as I could relate to the difference in attitude there. Lilian then positioned my daughter to take a picture with her. She was so enamored with my kids. At one point my kids were fighting over apples & oranges literally. She told me how nice is was to see kids fight over fruit rather than candy. Lilian signed my son’s belt too! 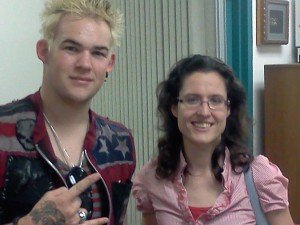 Me: As you mentioned onstage, you have Tourette’s Syndrome. How were you able to change how others saw you, so you could realize your gift?

James: I used to want to be “normal.” However, I started to realize that if the kids who were teasing me were “normal,” that is not what I wanted to be. I believe I am here for a reason and I am different for a reason. Recently, I have become involved with a documentary called, “Different is the New Normal,” which focuses on a teenager named Ariel Small. Ariel has Tourette’s and Asperger’s (High Functioning Autism) like myself. I am using my experience to inspire him and others like him.

Me: Can you tell me more about how you realized you had a talent for singing?

James: Well, music has been how I have made it through.

Me: Was there a specific event that was your turning point?

James: When I was 12, my sister was performing in musical theater. I attended their practices every chance I got and on the final day of their performance, the director let me perform onstage. From then on, I knew I wanted to be onstage performing and entertaining others.

Me: So I hear you are going on tour on April 12th. Tell me more about that.

Interview Notes: I had to mention the fact that I thought he should’ve won AI. He replied, “It is what it is” in a very cool, nonchalant way. He then remarked about how his son had hair as long as my son’s hair, but that they just cut it off. He told me his wife was saying that they should’ve left it alone. I’ve had that debate with both myself, my husband and my mother-in-law. I think my son has rockstar hair and I want to keep it that way. Now I have James recommendation to back me, as he said, “Don’t cut it” in an emphatic manner. The interview actually was the most extensive, as he continued to talk in a very down to earth tone while I noticed his people behind him signaling that he had to go. He did not seem rushed at all, really taking the time to give me the chance to speak in-depth. 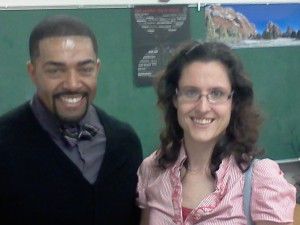 Me: How did you go from being a Harvard educated lawyer to a WWE Superstar?

David: It started with me being on a reality show as a lawyer and realizing I wanted to be in the entertainment industry. I went about reinventing myself to get where I am.

Interview Notes: We did get to exchange brief commentary about how people aren’t necessarily defined by their career and that they can move on to pursue their dreams no matter what they may be. The handlers were basically rushing him to leave, so I only got one question out, but he was very congenial. We did get a chance to take a quick photo and he also signed the belt as well.

Overall, it was such a great experience, not only to interview them but to witness how much they inspire others. As role models, it is so important that people in the spotlight set a good example. I believe the youth left with a once in the lifetime experience they will not soon forget. Visit http://www.beastaralliance.org if you would like to find out more information about the program & to take the be a STAR pledge. 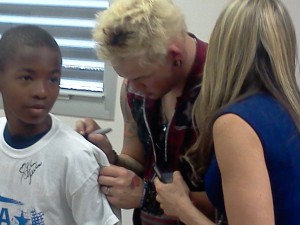 On a separate note, the WWE held the WrestleMania Reading Challenge Finals at the
Miami-Dade Public Library this morning. More than 2,000 libraries and 50,000 children from across the United States and Canada participated in this year’s challenge through the Young Adult Library Services Association (YALSA), a division of the American Library Association.  As guests of WWE, 20 finalists competed three winners from grades 5-6, 7-8, and 9-12 will be named World Champions.

Tonight at 8pm is the Hall of Fame induction and of course, tomorrow is Wrestlemania!! I’m crossing my fingers I get a chance to attend.

Oh and I have a update treat coming to this post. I have two cool videos taken from the event, but you have to check back here to get them. While you wait, why don’t you tell me about your favorite WWE Superstar or Diva in a comment below.