Today was a very interesting day for Social Media. Not only did Mashable host its annual Social Media Day, but many social platforms went down simultaneously because of an issue with a one-second calibration on the clocks. Yep, it was the clocks, not the social media enthusiasts, who overrode the servers of many major networks like Foursquare, Twitter and more!

In Miami, many well-known social media enthusiasts joined together to put on an event for the community and in hopes to catch the attention of Mashable on Social Media Day, June 30th, 2012. Recognized by the hashtag #smdaymia for the event and #smday for the day, the event was held at the Zadok theatre in Wynnwood. It was a pretty cool art gallery boasting some very unique, but beautiful, artwork and sculptures.

Yours truly arrived about two hours early to lend a helping hand because as a conference organizer I know, you can always use more volunteers. It was amazing to see everyone coming together for a free event in the spirit of social media.

I absolutely loved that they broke up the classes into different levels of experience. When it comes to social media, you have all kinds of people and all kinds of level of understanding. There was such an assortment of people to learn from, and even I learned a thing or two. It’s always important to remember that no matter how much you think you know about social media, someone else always knows more. Ever present faces such as Maria de Los Angeles, Jewel Figueras, Michelle Villalobos, and Alex de Carvalho, provided some entertaining, but informative presentations that were a sure hit amongst the audience.

While I was surrounded by many familiar faces from online, I was also able to make some really great new connections that will hopefully prove fruitful in the future. JennyLee of JLPR, (a newfound friend for the past few months), sponsored a 305 Cafecito area as well as old school electronics and media tools area, and let’s not forget the very much needed smartphone charging station. Red Bull sponsored a pretty cool social-infused picture booth ( see pic below) amongst some other cool things. They are promoting the upcoming Flugtag Miami on November 3rd and I got to take a picture with one of the reps. Amongst the many other sponsors was Overblog, which practiced a social activity of throwing shirts over a railing randomly and requiring us to make friends with new people in order to find the right size shirt. I opted to keep on my blinged out butterfly shirt (again see pic below). 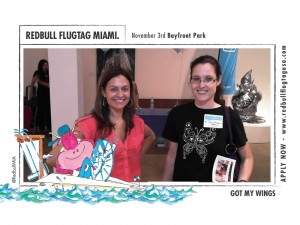 Afterwards, we headed over to the Wood Tavern where they served up some killer tacos served out of a carved out old Chevy or Cadillac. This is a half indoor, half outdoor indie type bar and probably perfect for the crowd. I felt at peace. I was amongst my people.

Overall, I think the event was a success and I look forward to next year. Were you there? Sorry, you missed out? Plan to be there next year? Let me know!