A few weeks ago, I had the amazing opportunity to virtually interview Gil Junger (Writer/Director), Gabriel Bateman (“Oliver”), Sarah Clifford (Animal coordinator/Dog Trainer), and “Henry” (dog) from the movie, “Think Link A Dog.” In preparation for this interview, I also had the opportunity to screen the movie at home. 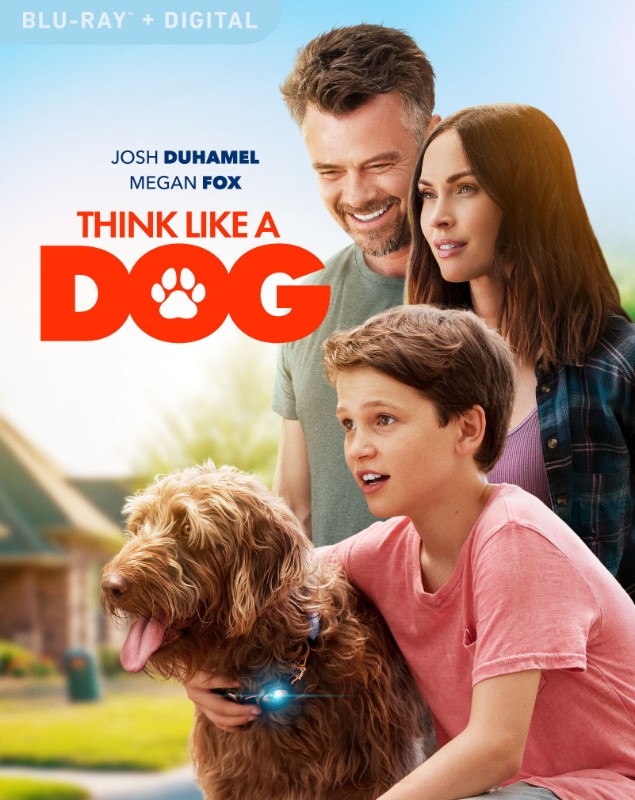 Josh Duhamel and Megan Fox star in this whimsical family comedy about a boy and his dog, and a science project that will change all of their lives forever. Think Like a Dog follows 12-year-old Oliver, a tech prodigy whose middle-school science fair experiment goes awry, creating a telepathic connection between him and his furry friend, Henry. The bond brings Oliver and Henry even closer as they join forces to comically overcome complications at school, and help Oliver’s parents rekindle their marriage along the way.

Think Like a Dog premiered on Digital, On Demand, Blu-ray (plus Digital), and DVD on June 9 from Lionsgate.  The Think Like a Dog special features include an audio commentary with writer-director Gil Junger and a making-of featurette, allowing an inside look at what it took to make this family-friendly flick. The Think Like a Dog Blu-ray and DVD is available for the suggested retail price of $19.99 and $19.98, respectively.

My Thoughts On The Movie (No Spoilers)

Overall, I thought it was a good movie to see with your family, especially if you have school-aged and pre-teen kids. It has action, adventure, comedy and drama.

As a mom,  I felt for both the parents and Ollie as they teetered on the brink of divorce. It really touched upon the reality of parents drifting apart and struggling to rekindle the spark that once was. You rarely see that much realness in a family movie. I also felt the emotions of disappointment, hope, faith and excitement; as Ollie worked through his problems and found solutions.

As a business owner,  I saw some important lessons that one might not expect to find in a “kid’s movie.” For instance, it’s important to protect your ideas and be careful who you trust with confiding them. Also, just because something fails, doesn’t mean you have to give up. You can hone your craft, make it better and come back stronger.

And most importantly, this movie teaches you to pay attention to the little things that make you happy, appreciate what you already have, and seek to understand others even when you communicate in different ways.

As you can imagine, conducting the interviews virtually was a different experience. Technical issues plagued it throughout (Who knew  lightning would strike my area, causing my power and cell phone to go out?), but we managed to pull through together and it was a wonderful experience.

While I was not the only media member in the group, I was still able to ask a question of each of featured guests. Below are brief summaries taken from their responses. I will be posting an edited video to my Youtube channel, and will embed it here when it’s available.

(Heather to Gil) If there was one takeaway for the audience, what would it be for you?

If there is one thing, it would be STOP. Be grateful for what you have. Stop looking outside of yourself. Ask yourself what you need. All of the answers are inside yourself.

(Heather to Gabe) Did you miss having “Henry” around after the movie was over? (Note: Henry was played by three different dogs, but a female dog was used for a majority of the movie.)

(Gabe) Yes, of course. I miss her a lot and I still do. She was the best co-star I ever had.

(Sarah) In my years of experience, I have worked with a variety of animals. I find that you can train any animal that is food-motivated.

We had the opportunity to ask Gil a question after the event, and my daughter had the following question:

Do you have any tips for tween actors who are auditioning for roles?

(Gil) It’s a very good question and coincidentally the exact reason I am currently creating my own website for this exact reason. To help guide actors of any age to learn how to obtain their best performance or nail the often illusive audition. Once my website goes live, approximately one month, I will be offering one on one sessions to help actors understand the scene they want to perform, learn objectively how to find their best, most authentic voice for the scene and offer the IDENTICAL experience they would have if they were working on set with me. I’ve been in the process of creating this for a while as my attempt to offer as many people the experience of working with an experienced director, an actor’s director as opposed to a coach, or an acting class, or someone discussing theory instead of actual direction from a working director.

There are a few general tips I can offer your daughter based on incorrect assumptions I have seen thousands of actors make.

1- Do Not deliver the performance you think the director is looking for. This is the number one mistake most actors make.

2 – Find a shape to the scene. Meaning: if the young person reads the scene about an argument with another young person at the school cafeteria for example, Do Not play the first line with the same emotional intention as the last line. What that does is offer an uninspired, flat performance that will feel repetitive even if the words continue to change. “I get it, you’re angry. But what else is interesting?” After you have familiarized yourself with the dialogue, try PLAYING AGAINST the intention just to see what happened. In other words, if the dialogue is filled with mild anger or frustration about something your friend did – try one pass as if you enjoyed whatever your friend did, as if you were complimenting your friend. Yes, that might sound confusing, but what it will reveal is a different approach to the exact same dialogue. A different way of getting the same message across. It may come out as sarcastic, ironic, condescending (as if talking to a child) or even mean as your behavior is kindness but the words are angry which could be perceived as passive aggressive.

3 – Find the apex, or emotional shifting point of the scene and play the before and after with an emotional difference. Once you find the a-side (before the turning point) give it a different emotional feel, different intent than the b-side (after the turning point). For example; Your friend is picking on you, the same way he has picked on you every day at soccer practice. But you’re used to it. It doesn’t feel good but you both have fallen into these roles with each other. But today is different, today you can’t just “keep it swept under the rug.” Find the most insulting line from him, maybe something personal like, you’re too stupid to be a goalie. (As opposed to “how did you miss so many shots on goal.) If that is the apex of the scene, play the a-side (before the turning point) accepting of what he’s saying; The attitude may be conciliatory, or apologetic i.e. I know, I’m sorry, you’re right, I’ll try harder, I was so close, I let the team down, I feel terrible, please give me another chance…. Then when he say’s something really hurtful, something personal like “You’re too stupid to be a goalie”, stop. Don’t respond right away. Let that insult resonate in your heart. Ask yourself why is this person speaking to me this way? Look at your teammate, show on your face a SHIFT FORM APOLOGY TO ANGER, then when you answer, do not come from a place of apology, (a defensive posture) come from a place of “Ok you’ve crossed the line and let me tell you where that line is”, (an offensive posture, a place of strength) and respond with the intention of STOP. That’s enough. I’m doing the best I can out here and I’m proud of how I’m improving. This is a game and you’re turning into a constant judgement of me, but you know what, “I don’t care what you think of me, or my intelligence, or my playing abilities. I’m having fun, and I refuse to accept or listen to your condescending crap. So, here’s how it’s going to be from now on…”

What that will do for the person watching your audition is show two distinctly different attitudes from the scene and exhibit a powerful arc for your character within one scene. That’s exciting for a director to see!

4 – In reference to the above example, DO Not overact. This is a easily the #1 flaw of all new actors. Trust The Words. By that I mean; if the line is “You know I was wrong about you, you’re not a friend at all.” An inexperienced actor will either yell this line, or have a very dark edge to it, or in some way be emotional out of control when delivering the line. I would suggest PLAYING AGAINST THE OBVIOUS INTENTION OF THE LINE and very calmly, quietly express the line as if you are thinking it, rather than saying or shouting it. It is a simple realization as if you were to say… “Huh, would’ya look at that. He’s not the person I thought he was. I don’t even like this guy. Oh well, whatever.” This adjustment of underplaying the emotion of the line, offering a CONTAINED, RESTRAINED delivery of the line will show a greater command of the craft. And a maturity beyond your years.

Think about it: if a very powerful person wants to get someone to leave his office – he doesn’t need to STAND UP, stare at the person and yell GET OUT!!! He’d probably not even look up at the person because that person doesn’t deserve that much attention. He’d probably continue doing whatever he was at his desk, not look up and very calm, quietly say, “get out.” Because he’s powerful and strong and isn’t willing to give this person, this nat one iota of his attention. Say both lines for yourself right now, imagining you are a CEO of a company and very confident in your abilities. Stand up quickly and yell GET OUT!! Now, sit down, take a deep breath and slowly exhale calming yourself. Glance at something on your desk and quietly, from a place of strength, whisper “get out.” Oddly enough the second one is more powerful because of its dismissive attitude and it comes from a place of strength and confidence.

There’s so much more, but I hope these simple adjustments help you as you continue with your acting. Who knows, maybe after my website called FasterClass comes on line we can work together and help you land your first job as an actor.

Get Social with Lionsgate

All opinions expressed are my own. I was not monetarily compensated for this post.