Raise of hands, who here has secretly wished they could be a model? I know I have thought about it since I was younger. I was even approached several times when I lived in NYC; once to even walk the runway during fashion week. However, my focus on getting my college studies in (and my admitted lack of confidence at the time) caused me to back out from those endeavors. So needless to say, I secretly indulge in model and fashion reality shows so I can essentially live through the contestants.

As we all know I call South Florida my home, so I was pretty excited to find out that one of those shows, Model Latina, would be returning to South Beach this season. In its fifth season, Model Latina is returning after seasons in NY and Las Vegas. With ten new contestants, new celebrity judges including Carlos Ponce, and exciting new challenges; I’m sure this season will be MUY CALIENTE! The first episode premiers tonight at 10pm EST on nuvoTV. (nuvoTV is the first and only English- language television network targeting American Bi-Cultural Latinos ages 18-49. It is available in NY, Chicago, Miami, Los Angeles, the San Francisco/Bay area, as well as the entire top 15 Hispanic DMA, so check your local listings for the channel). 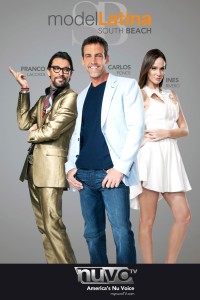 These latin beauties from all over the country are competing to win $25,000, a spokesperson role for nuvoTV, and a modeling contract with international agency Q Management. Check out the Sneak Peek video, Meet the Cast, and find out more!

Here’s a little bit about the contestants and you could learn more here:

I am really going to need to check this out before I decide who I am rooting for. I do know that I am originally a New Yorker and my family is Puerto Rican, so should I be looking at Jillian or should I root for Maybelline because I studied Psychology in NYC too? Let’s see how their personalities show up and then I’ll decide who I think should win.