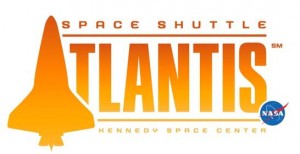 This $100 million attraction, opening June 29, will shine the spotlight on NASA’s 30-year Space Shuttle Program and its accomplishments, most notably the deployment and servicing missions for the Hubble Space Telescope and the launch and assembly of the International Space Station (ISS).

The new Space Shuttle Atlantis attraction tells the stories of the Hubble Space Telescope’s successes and setbacks with an entire area – including a full-size, high-fidelity replica – devoted to the first of NASA’s great observatories.

This week, crews installed the Hubble Space Telescope replica, which cuts through two stories of the attraction. The replica measures 43 feet long – more than a full-size school bus – and 14 feet in diameter. Its fully deployed solar arrays extend an additional 7 feet on each side.

The model was created in pieces for shipping and to fit inside the building. The design also had to be lightweight because of the replica’s size and the need to suspend it from the ceiling. Guard-Lee, a Florida firm that specializes in manufacturing aerospace replicas, worked with a stress engineering company to help define a lightweight structure of primarily aluminum.

Guard-Lee designed the model based on actual photographs of Hubble to recreate the exterior surface textures of the space telescope as accurately as possible with commercially available materials. The look of Hubble has changed over the years, so the replica was designed to portray Hubble as it looks today in space, capturing surface details as small as a few inches in size.

Once they arrived at Space Shuttle Atlantis, the replica pieces were preassembled on the floor below, and the replica was then lifted 63feet into place, with the aperture facing up at a 45-degree angle and the aperture door open. The replica includes arrays of solar panels and two booms with antenna dishes deployed.

“Guests can get a feel for the incredible size of the telescope and will be able to view the Hubble replica from very close up, just as they will do with Atlantis,” said Bill Moore, chief operating officer of Kennedy Space Center Visitor Complex.

A nine-minute cinematic presentation in the 40-seat Hubble Space Telescope theater tells the dramatic story of Hubble’s triumph over technical issues, including flaws in its mirrors and other broken or outdated equipment, during its 23 years in space.

Side by side at the new attraction, the Hubble replica and Atlantis – the last shuttle ever to make contact with the space observatory – remind guests of the vast unknowns that remain to be explored in NASA’s next great space program.

It was on STS-31, in Space Shuttle Discovery’s payload bay, that the Hubble Space Telescope, NASA’s hope for “a window to the vast unknown” was first ferried into space on April 24, 1990 to be deployed one day later.

The space shuttle was not only the key to deploying the massive observatory; it was also the key to its salvation. Five servicing missions spanned 16 years:

With each servicing mission, Hubble’s power increased, allowing the telescope to remain in service to this day, orbiting 350 miles above the Earth and high above the distorting effects of the atmosphere. As the film and surrounding graphics attest, not only has Hubble sent back thousands of breathtaking deep-space images, it has provided invaluable data on the age of the universe, the nature of quasars, the behavior of black holes and the existence of dark energy. Images collected by the groundbreaking spacecraft also have paved the way for far-reaching and diverse spin-off technology, including that used for breast cancer detection and identification and tracking of marine life.

Since Hubble’s deployment in 1990, the space shuttle has launched two more of NASA’s four great observatories, including the Compton Gamma Ray Observatory (CGRO) in 1991 and the Chandra X-ray Observatory in 1999. The Spitzer Space Telescope was launched aboard a Delta rocket in 2003.

About Space Shuttle AtlantisSM
The world’s most comprehensive attraction devoted to the space shuttle, Kennedy Space Center Visitor Complex’s new Space Shuttle Atlantis brings visitors nose-to-nose with Atlantis as only astronauts have seen it before – with payload bay doors open as if it were floating in space.

More than 60 exciting, educational touch-screen experiences and high-tech simulators invite guests of all ages and all interest levels – from students to “space geeks” – to “be the astronaut,” bringing to life the people, passion and patriotism behind NASA’s 30-year Space Shuttle Program as well as the complexity of the engineering marvel that launched the Hubble Space Telescope and built the International Space Station (ISS). Visitors can spend their vacations making memories such as conducting a virtual space walk; docking to the ISS; creating sonic booms and gliding down the Re-entry Slide; experiencing the sensation of floating in space; and strapping in to the sights, sounds and sensations of a shuttle launch, among many other interactive experiences.

Space Shuttle Atlantis is the centerpiece of the 10-year master plan developed by Delaware North Companies Parks & Resorts, operator of Kennedy Space Center Visitor Complex for NASA since 1995. The Visitor Complex is not funded through tax dollars or appropriated funds. Operation, maintenance and development are funded through revenue generated by ticket, food and merchandise sales. Space Shuttle Atlantis is the culmination of years of development by Delaware North Companies Parks & Resorts and St. Louis-based PGAV Destinations, in partnership with NASA. The attraction is included in regular admission to Kennedy Space Center Visitor Complex.