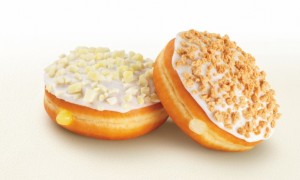 Who likes free donuts? I know I do. In Honor of National Donuts Day on June 7, South Florida Dunkin’ Donuts restaurants (along with Dunkin Donuts national and worldwide restaurants) will offer guests a free donut of their choice (while supplies last) with the purchase of any beverage.

Donut lovers have other reasons to look forward to June at Dunkin’ Donuts, as the brand unveiled new Summer Fruit Donuts to celebrate the season.  Dunkin’ Donuts’ new Summer Fruit Donuts are available in two fun fruit flavors: Lemonade, featuring a yeast shell filled with lemon flavored filling, frosted with white icing, and topped with lemonade bark; and Key Lime,featuring a yeast shell, filled with key lime flavored filling, frosted with white icing and finished with a graham cracker topping. Both new donuts are available through August at participating Dunkin’ Donuts restaurants nationwide. I myself will probably stick to my strawberry frosted with sprinkles donuts.

Here are some fun facts on donuts for your convenience. Did you know:

What’s your favorite donut from Dunkin’ Donuts? Tell me in a comment below.

Disclosure: I did not receive compensation for this  post, though some of the content was provided to me by Dunkin’ Donuts.