There’s a new Dunkin’ Donuts at 4430 Hypoluxo in Lake Worth (or should I say it was a grand re-opening). For today only they offered up special appearances by Dennis Rodman, Tim Hardaway, Kevin Rolston & some Miami Heat dancers. They also offered up free donuts for anyone coming in sporting a Rodman-like colored do and 95 cent medium coffees in honor of Kevin who hosts the Kevin, Virginia & Jason Show available on WILD 95.5FM.

With lines around the building, I was fortunate enough to be able to skip ahead and enjoy the air conditioning while we waited for some of the  NBA talent to arrive. While I was waiting, I got a chance to gnosh on my historically famous strawberry frosted with sprinkles donut and an iced mocha coffee, as well as interview some people.

First up, I spoke with the franchise owner Steve Rubiano. Mr. Rubiano informed me that this location was just one of three he owns. The location features a drive-thru and free wi-fi as just a few of its amenities. I noticed it boasted a rather large open area with tables set to the sides. Mr. Rubiano told me it was designed using the “20/50” design that Dunkin’ Donuts allows its franchisees to choose from. He told me he chose to have Tim and Dennis come because he was looking for a big draw and wanted to capitalize on the NBA Finals buzz, and that both Tim and Dennis lived locally in Miami. As for having Kevin, he said that Kevin was a very popular morning radio host that could also bring a draw from local South Floridians. Mr. Rubiano also pointed out that they had created special donuts for Dennis and Tim. Dennis’ featured an array of colors and streaks of multi-colored icing. Tim’s donut had the #10 with black & red, like his Heat number and jersey. 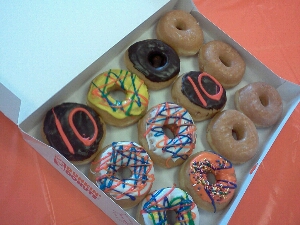 After that, I interviewed Kevin Rolston. Kevin informed me that his show airs on WILD 95.5FM in South Florida from 6a-10a, and that it is syndicated in other locations as well. The content of his show his pop culture & lifestyle with a humorous angle, and it is mostly talk radio with bits of Top 40 music played here and there. Kevin also informed me that he has 14 year old twins and a 4 year old sign, while his female co-host Virginia has a 7 year old daughter. He said that have a good mix of age groups between them and get together to talk about the trials and tribulations of being a parent. Kevin & I got into a good discussion on sports and how our families were dedicated sports fans. (He got a kick out of my daughter’s middle name being Shea even though I favor the Yankees.) 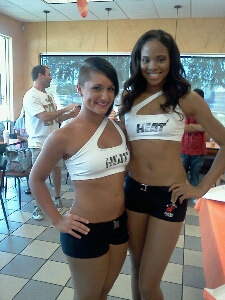 Two of the Miami Heat dancers were signing memorabilia, circulating with the waiting line and serving free iced tea. I could only imagine being able to pull off their tiny outfits. 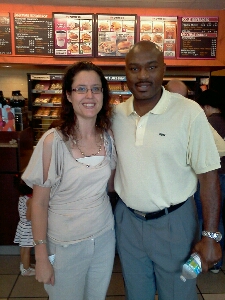 The first man on the scene was Tim Hardaway. (Dennis was apparently delayed due to traffic on I-95). Tim took a good amount of time being interviewed and I did get a chance to catch an individual picture with him while I told him about my husband being a “Run TMC” fan. (Google it if you are interested in learning what that is.) Tim seemed nicer than what I expected and also much shorter too! He was only a little bit taller than me, which is small for an NBA player. 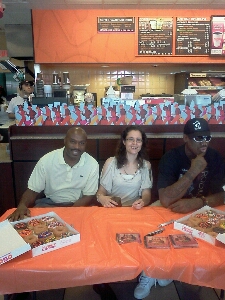 Dennis Rodman arrived about an hour and a half into the event, so they rushed him straight to the table where he would be taking pictures and signing autographs alongside Tim. They had to sneak me in there somewhere between the 100+ fans who showed up. When it was my turn to jump in, I got Tim to sign one side of my free travel mug I got for being one of the first 100 customers to order food. Dennis was being interviewed by ESPN simultaneously, so he signed the other side afterward (hence the reason he was looking away in the pic). 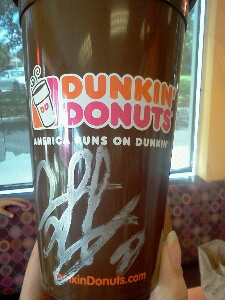 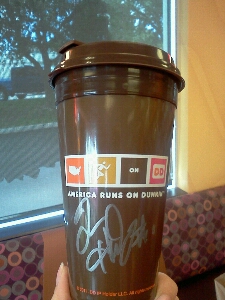 Dennis seemed a bit distracted in the beginning, but seemed to warm up the fans as the event went on. As it was getting closer to the 2p end time, the GM of Dunkin’ Donuts began rushing the fans through to ensure that everyone got a chance to take a picture with and get items signed by Tim & Dennis before they left. It definitely was interesting to see what people brought in to get signed, like a plastic pig, goofy hat with ears, and a small banner from a game 12 years ago.

I’m so glad I got to go to this event solo as I think it would’ve been crazy trying to manage my two little ones between  all of the people circulating in the room. Overall it was an enjoyable experience and now I have a signed coffee cup to go with my signed Larry King coffee can. What’s next, a signed Philadelphia coffee ice cream container? Oh wait, I better stop or you’ll think I am a bit obsessed with coffee.

Okay, shoot me your comments. Will you be visiting the new location? Has my article got you craving Dunkin’ Donuts? Have some thoughts about Tim Hardaway or Dennis Rodman? Want to talk about The Heat in the NBA Finals? I’m game.