I am participating in this giveaway on behalf of Bloggin’ Mamas. 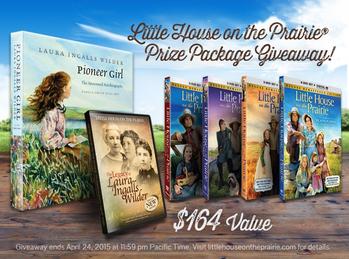 While “Little House” might seem a bit older than my time, I do remember watching reruns in the late 80s because of Michael Landon. He was on another show I watched and liked, so I sought out “Little House  on the Prairie” because of him.  When he passed away in 1991, I mourned him, even at the ripe old age of 11. I revisited the “Little House” encounter years later when I tattooed HalfPint on my arm for a good friend who has since passed away as well. I had a bunch of Melissa Gilbert comparisons from that point on. The tattoo is now covered up with roses as I grew weary of explaining that the tattoo had nothing to do with “Little House.” And here we are, over 30 years after the series ended, and I am working with them. How cool is that?

To cel­e­brate the launch of the offi­cial Lit­tle House on the Prairie® web­site, I have joined some of my fellow Bloggin’ Mamas to offer the Ulti­mate Prize Pack­age Giveaway (ARV $164).

You can also enter a 2nd giveaway on the Little House on the Prairie website for a chance to win a second prize package.

Dis­clo­sure: This giveaway is coordinated by Bloggin’ Mamas and is sponsored by Little House on the Prairie. I was not compensated for sharing this post.