I am sharing this on behalf of a Bloggin’ Mamas Social Good campaign. I am not being compensated for this post. 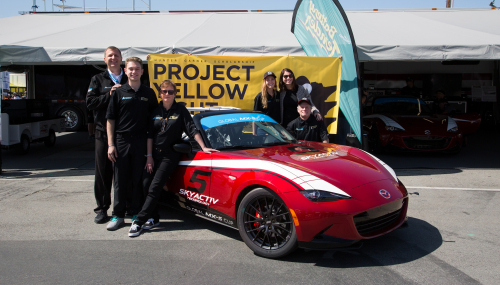 According to a 2013 NHTSA report, ten percent of all drivers aged 15-19 years old involved in fatal crashes were reported as distracted at the time of the crashes. This age group has the largest proportion of drivers who were distracted. To further the reach and impact of the peer-generated content, NHTSA has partnered with the Ad Council to turn the winning videos into public service advertisements, which will be distributed to more than 1,600 media outlets nationwide.

“Distracted driving is deadly and young drivers are most at risk, so we need to make sure they get the message,” said NHTSA Administrator Mark Rosekind. “The Project Yellow Light contest, which uses peer-to-peer messaging, demonstrates how creative public awareness efforts can reduce distracted driving on our roads.”

Established in 2007, Project Yellow Light was started by Julie Garner of The Martin Agency, in memory of her teenage son Hunter Garner who was killed in a fatal car crash. The annual competition aims to encourage young adults to be safe on the road, and generate education and engagement around this issue.

“We’re thrilled with this year’s contest; we had a record number of participants from all over the country,” said Julie Garner, Founder of Project Yellow Light. “All of the students produced top-notch films and are doing their part to save lives. I couldn’t be prouder of the youth and their effective efforts to stop distracted driving.”

Second and third place prizes were awarded to high school students Aneyza Clark of Dallas, Texas, and Ryan Robert Reid of Fairburn, Georgia, and college students Lindsey Brown of Culver City, California, and Tiago DeSouza of Hagerstown, Maryland. In addition to seeing their videos turned into PSAs, first place winners will receive $5,000 in college scholarship funding. Second-place and third place winners were awarded $2,000 and $1,000 scholarships, respectively. All scholarships were provided by Mazda Motorsports. U-Haul will also provide both first place winners with up to $2,500 in moving expenses.

“Teaming up Project Yellow Light with our young Mazda racers has been a great match. The creativity of the students matched with the courage and conviction of our racers gives us two paths to share the message of the dangers of distracted driving. We’ve been very impressed with how Mazda racers like Ben Albano, Kenton Koch, Tristan Nunez, among many, have embraced this program. Their efforts are a clear example of Mazda’s Drive 4 Good efforts in the local, regional, and national marketplace” said John M. Doonam, Director of Mazda Motorsports Mazda North American Operations.

Ben Albano, a Mazda racer, who started a karting event in his hometown that raised $4,500 for Project Yellow Light, was among the judges.

“With almost 600 videos submitted this year, I was blown away by the incredible creativity and raw emotion that each of the finalists conveyed. Distracted driving is a growing epidemic in our country and it is reassuring to watch my generation through the PYL scholarship contest get that message out.”

“Project Yellow Light empowers youth to create and share messages with each other about the consequences of distracted driving. Peer-to-peer education models are powerful and NOYS is proud to partner with Project Yellow Light as they mobilize youth to positively influence their peers,” said Anita Boles, Chief Executive Officer of NOYS.

“Congratulations to all the talented creators who submitted videos for this competition,” said Lisa Sherman, president and CEO of the Ad Council. “Peer influence is such an important factor in changing minds around issues like distracted driving, and we hope that these authentic PSAs will resonate with young drivers across the country.”

This post was shared on behalf of a Bloggin’ Mamas Social Good campaign. I was not compensated for this post.