I was just recently contacted about a new show MTV’s Tr3s is launching named, “Quiero Mi Baby.” It is part of their #1 “Quiero Mi” series of reality shows that explore cross-cultural parenting. Being that my husband is Puerto Rican and I am basically a Caucasian mutt, I can totally relate to the challenges of having a bi-cultural & bilingual family. The new show is set to take you through the journey of picking baby names, choosing religions, superstitions, language barriers and even immigration, all as it relates to having a baby with parents of different heritages.

The first episode debuts tonight, April 16th at 9pm EST and each additional episode will air on Mondays at 9pm EST. I am actually looking forward to it as I, myself, have begin this blog series to explore living in a bi-cultural household.

The show’s new theme song “De Nuevo” by Eli Jas captures the feeling of what the show is all about, new beginnings and pure love that outlasts the good and the ugly. As singer/songwriter Eli is featured in the official video for “De Nuevo”, which premiers on Tr3s. The video was produced by Tr3s executive German Verdi, who served as Executive Producer and Trevor Lafargue as Creative Director.

“The inspiration behind “De Nuevo” came from the feeling of having unconditional love for someone. How someone brand new can make you feel as though you have known them all of your life, a love that is strong and prevails in any situation,” said Eli Jas.

Tr3s introduced Eli Jas as part of its Descubre & Download artist in January 2012 and her debut single “Tú Me Haces Volar” drew thousands of downloads making her the most successful D&D to date.  The multi-cultural Latina (Chilean, Panamanian and Dominican) is the quintessential native New Yorker. Born in Chelsea, in the borough of Manhattan, the 20 year old is shaking up the Latin music industry with her R&B phrases, pop melodies and sultry voice. Her unique mash up of pop production over Bachata grooves is incredibly infectious, a style that stems from the authenticity of Eli Jas. Her first single foreshadows the sounds off her upcoming debut album Choose, which is scheduled for release in summer 2012. (source: Press Release)

Tonight we meet Christina & Kevin. Here is the synopsis: 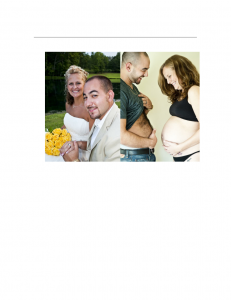 EXPECTANT PARENTS: Christina (28) & Kevin (25)
BACKGROUND: Caucasian (Christina) & Cuban (Kevin)
DUE DATE: January 4th, 2012
LOCATION: Powder Springs, GA Christina & Kevin are high school sweethearts only they didn’t date in high school. Being older than Kevin, it was a big no-no for Christina to date him even though she always thought he was cute. It was no surprise then that years later they ran into each other and hit it off, got married, and have now decided to start a family. Christina is such a control freak that she planned the perfect time to get married, but Kevin with his more laid back Cuban approach to things is taking the pregnancy as it comes, but not without making a room for the baby to live in with his wood making skills. With their two dogs they already have a family of four and now they have to make room for one more: a girl. Will these two blend their American and Cuban traditions and family to decide on a name that both families will like? Will Christina be able to let go of her control issues and realize that pregnancy is all about expecting the unexpected? Watch tonight to find out!

I enjoy the fact that MTV is taking on the discussion of cross cultural parenting in a world that has become more open-minded in the last few decades. In fact, I had no idea they had other shows tackling these situations until they contacted me. I truly will be seeking out the other shows’ episodes because I am curious about the dynamic.

Are any of you living in a bi-cultural or multicultural household? How have you dealt with the differences?