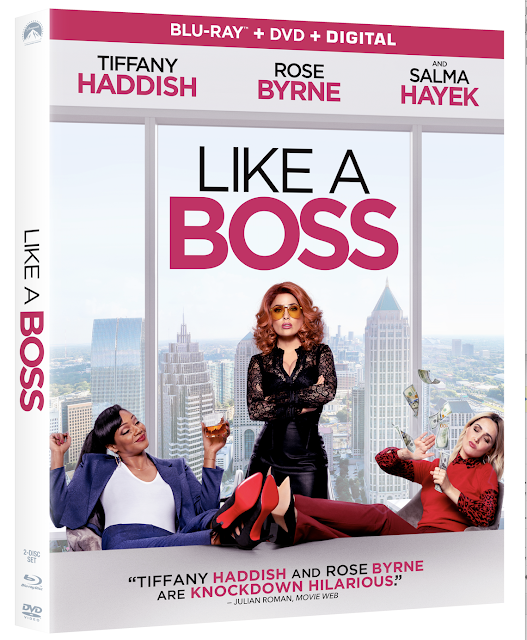 As a female entrepreneur, this movie sparked my interest and I can’t say I was disappointed. That’s why I am happy to partner with some blogger friends to offer this giveaway of the movie, so you can watch it too!
On Digital April 7 and Blu-ray™ Combo Pack April 21 with Deleted Scenes and Behind-the-Scenes Footage*

“Tiffany Haddish and Rose Byrne are knockdown hilarious” (Julian Roman, MovieWeb) in the “outrageously funny” (Dave Morales, KRIV FOX- Houston) comedy LIKE A BOSS, debuting on Digital April 7, 2020 and on Blu-ray, DVD and On Demand April 21 from Paramount Home Entertainment.

Due to current world events, shipping of all non-essential products has temporarily been suspended for the near future and we have been told we’ll be advised when that has lifted and shipping can resume. Winners of physical products will receive their prize when it is determined when shipping can resume. Thank you for your patience and in the meantime, enjoy the Digital Code of the movie and we hope you’ll enjoy the kit when it arrives!

Entry-Form
The Digital* and Blu-ray releases deliver even more laughs with deleted scenes and behind-the-scenes bonus content featuring interviews with the uproarious ensemble cast.
Best friends, Mia and Mel (Tiffany Haddish and Rose Byrne) are living their best lives, running their own cosmetics company until a villainous beauty mogul (Salma Hayek) conspires to steal it from under them. When her devious plan drives the besties apart, Mia and Mel learn that sticking together is the only way to turn the tables and take their company back. The beauty business is about to get ugly.  The film also stars Jennifer Coolidge and Billy Porter.
BONUS FEATURES ON BLU-RAY COMBO & DIGITAL*
The LIKE A BOSS DVD includes the feature film in standard definition.
www.LikeABossMovie.com
Facebook: www.facebook.com/LikeABossMov/
Twitter: https://twitter.com/likeabossmov
Instagram: https://www.instagram.com/likeabossmov