My Kids Are Excited for WWE Slam City

As a WWE ambassador, I get to learn about all of the new programs for kids and my kids are happy to learn that WWE Slam City is back! The new episode of WWE Slam City, “Between a Rock and a Pizza,” just came out today and you can view it online here: WWESlamCity.com or below. In this episode, the Rock and Mark Henry showdown over a “ridiculously large” pizza.

As you can see by this pic, I am very familiar with ridiculously large pizzas: 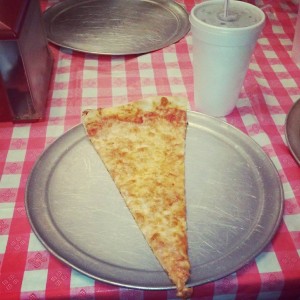 What is WWE Slam City™?

If you are not familiar with WWE Slam City,™ it offers a series of 26 original, stop-motion animated, two-minute shorts featuring WWE Superstars in the animated world of WWE Slam City. In the storyline, the WWE Superstars are sent to WWE Slam City to find day jobs after The Finisher, a new animated character, fires them.

The 26-episode WWE Slam City series is co-produced by WWE and Mattel’s Playground Productions, a new division within the Mattel Global Brands whose mission is to identify, cultivate and produce compelling storylines through multiple platforms. In addition to WWESlamCity.com and Cartoonium on YouTube, WWE Slam City will also be available in the U.S. on WWE Network, Hulu, PlayStation®, Xbox, AOL On, Nintendo, Vudu, Google Play, Kabillion, Mattel.com and iTunes.

Complementing the episodes will be a full WWE Slam City merchandise line, including toys, apparel, back-to-school accessories, books, graphic novels and home videos, which will be available in stores by the end of 2014. In 2015, a WWE Slam City mobile game, as well as health and beauty items, home goods, party supplies and stationery will be available.

We all know that kids’ attention spans are much shorter these days, so two-minute episodes are ideal to keep them engaged. My kids watch a lot of two-minute programs as our house is into animation. As I checked them out, I felt that they were entertaining for adult! As for this episode, I am a huge fan of the Rock, so of course I was amused.

Disclosure: I am a blogger ambassador for the WWE. I was not compensated for this post. All opinions are my own.